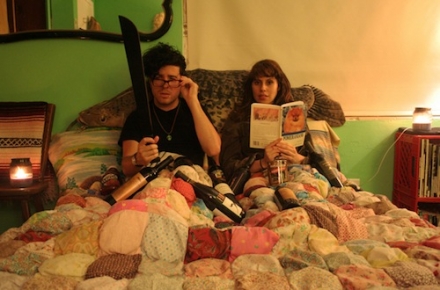 Alligator Indian have just released a new song and it might be the best thing I’ve heard this month. On “Corpsing” the avant-pop duo give Avey Tare a run for his money in terms of making music that could score the LSD episode of Scooby Do and the 13 Ghosts. The digital arpeggios and electronic drums on “Corpsing” are reminiscent of something you might find in a Playstation-era Final Fantasy game. It’s the vocals, which are both classically elegant and reeking with the haunt of a swampland tomb, that truly frame the world “Corpsing” has crawled from. Choruses explode with pitch-shifted vocal bolts that cover for low, distressing howls who drag you down into the bog.

“Corpsing” is the perfect soundtrack to an autumn afternoon in a graveyard, or a midnight séance in an English garden. Alligator Indian’s upcoming EP, the Talking Heads referencing More Songs About Animals and TV, is out September 17 on Bleeding Gold Records.