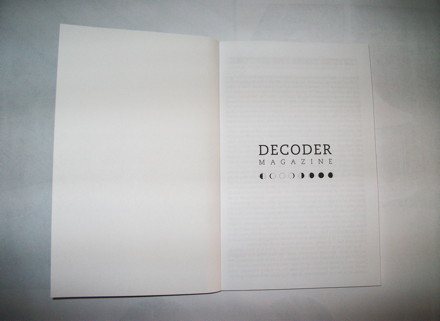 In the past 18 months or so, our dearest friends over at Decoder (fka, partly, Get Off The Coast) worked hard to step out of the internet and into reality the physical world by planning their much anticipated first magazine, i.e. something that you can actually hold in your hands and touch and smell, something that does not glow artificially while slowly ruining your eyesight. Remember? During the last two years, there has been a slow yet conspicious tendency among, sorry, 'digital natives' to revive the way we used to inform ourselves, the return to actual paper first marked by McGregor's acclaimed Report, followed by our Berlin friends' lovely Cartouche (in German), hopefully still Ad Hoc sometime soon, and, right now, Decoder. As far as we can tell, the first issue has become nothing short of stunning, with countless riveting contributions by underground luminaries such as Noah Klein, Joe Miller, Brad Rose, Liz Pavlovic, Michael McGregor, and others (we humbly submitted a small piece about Berlin), with much to see and read and enjoy. You may look at some pictures from the magazine right here, and exclusively read excerpts from the engaging editiorial, in which the founders present their vision of contemporary printed counterculture. Get in touch with their thoughts below, and get your copy of Decoder #001 over here. 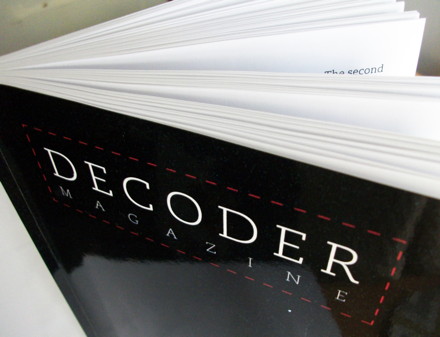 To some extent the first issue of Decoder may read like a “thought catalog.” In a manner of speaking, it is one. Each segment has a more or less extensive personal connection to “our” every day lives. “We” are the editors of Decoder and we see our personal histories as inseparable from the expression-to-date of Decoder. How we hear and write about the music we cover is conditioned by our experiences outside of music, as much as we focus on sound. In many frameworks for studying culture, music is seen to express something about the society that produced it. The interpretation of music can similarly be expressive of values, and so there are a multitude of interpretations shaped by more than just the format of an album or how it sounds in a car vs. a home. So, we see it as part of our responsibility to talk also about the significance of how we talk about music. In thinking about how we, as a group of writers, can morally orient ourselves toward a readership and a body of creators — people who become our stock in trade — we feel that our own personal morality must be represented in Decoder. An ethical Frankenstein, if you will. For the most part, our group has rarely had to compromise in how we organize ourselves. We sync up and so the project makes sense, allowing Decoder to resemble who we are. 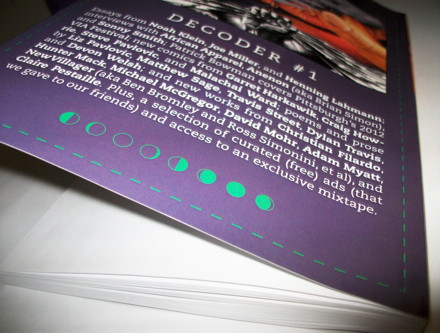 It's easy to pick up the thread of our personalities within. A presumed unity in magazines is that content will connect to editor A, B, or C; whether a friend we solicited work from in person or an artist admired from afar. We might like to think that an individual’s most generalized framework for understanding society is important to more than just that person, but whatever that insight might be is a hard sell, now as ever. We feel direction around us and presume a unity of purpose, the details of which are further described every day in the nature of our herding. I like to link this with the now passé fear of “globalization.” We feel a world (could be any) changing around us and presume it has a singular outcome. Globalization never meant we'd have to languish with a single bland world culture. It portends controversy over the access and categorization of information, which unfolds today in such profusion that our realities paradoxically stop overlapping with the same ease. The successive refinement of generations, divorced from a sense of community by a rural brain drain and a new reverence for urban living, is promoting neighborhoods as new "intentional communities". The new "cults", we might provocatively say. Like its predecessors, our generation helps police new norms for living in a fundamentally altered human aggregate ( the biggest ever). 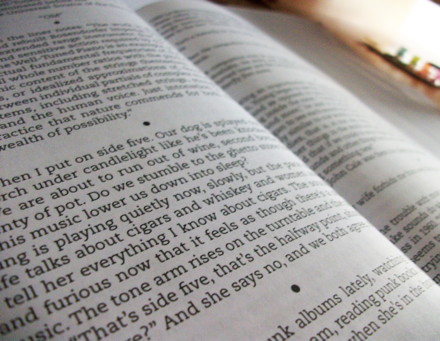 But what does that have to do with us? In line with the blogging movement that helped stabilize Decoder’s place in the universe, we keep a visible personal connection to our output, never obscuring the "men" in the "machine". We refuse to be only agents in an exchange. To that end, we try to emphasize transparency about our “process.” The ideal outcome of our interactions with anyone is friendship. Though we can identify markets that might partake of our offerings, we hope the whole range of our expression will rarely seem to service them.

Having said all that, Decoder is a music magazine because the group responsible is made up of music fiends, as opposed to video game nerds or foodies (though we’re just a bit of those as well). We decorate it elaborately with a fringe of miscellaneous creativity and positive social enterprises because music, like most creative projects, is fundamentally dynamic. The venues for appreciating creativity are rarely private or personal, so Decoder is our attempt at compromise and a clearer vision of the culture developing around us. 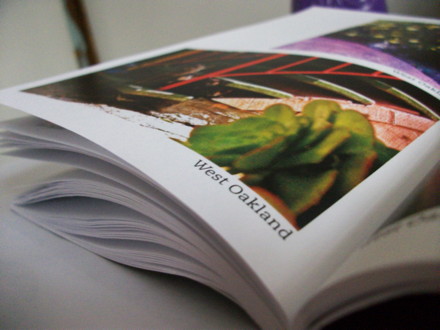 An exclusive mixtape has been compiled to initiate and celebrate issue #001, and you may stream two widely different tracks from it below, our man Jef Barbara's "Black Caress", and "Eastern Danger" by Berlin-based one-man project Ghostandthesong. The whole mixtape is available directly here or over on bandcamp to order alongside the magazine, or you grab the whole, hugely recommended package deal over here.