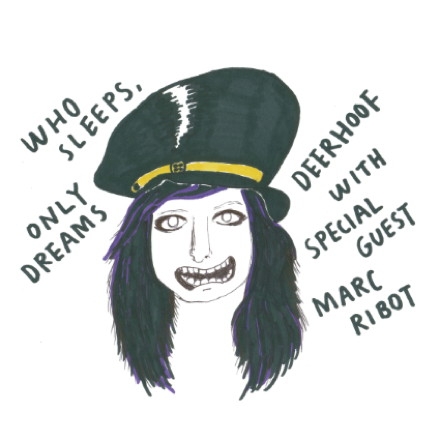 It's the vernal equinox! Sunshine, flowers, and Record Store Day (April 19) are nearly upon us. To commemorate the upcoming music holiday occasion, Deerhoof and Marc Ribot's Ceramic Dog are releasing a special split 7" featuring two tracks; "Who Sleeps, Only Dreams," and "Hide With Me." The first single is led by Deerhoof, a band who is used to creating elaborate noise pop soundscapes for featured artists. After touring with Ribot's Ceramic Dog project and producing one of their tracks, Deerhoof shared an instrumental of their song "Qui Dorm, Només Somia" with Ribot, who blessed it with the epic, emotive guitar playing he's known for. The song develops in sections, each with their own vibe, but amounting to one artful and cohesive piece that demands multiple listens. Play the track exclusively below.

The Deerhoof & Marc Ribot's Split 7" will be available in select stores on Record Store Day, April 19, from Northern Spy Records.