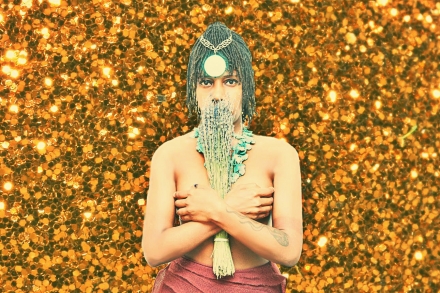 Francine Thirteen is important. An afronaut hailing from Dallas, Francine Thirteen describes her latest work as "ritual pop." This is a smart move – not only because "ritual pop" is indeed a fitting picture of the Venusian's music, but also because of the mutual power that the two words "ritual" and "pop" lend to each other. ‘Ritual’ evokes the transformation (and conglomeration) of mundane acts into efforts-toward-the-supernatural. In that way, 'pop' acts as a storehouse of possible mundane actions from which ‘ritual’ draws. Popular music, insofar as it is widely enjoyed (by the 'populace'), must be in some way mundane and repetitive. That is pop's plainspoken charm. But of course, the pop worth surrounding yourself with works so much harder than that. It's not interesting unless it does things you don't fully understand. Introduce: ritual. Introduce: the unknown, the superhuman, forces that signal either toward the greater good or the greater vice. The Venusian seems to know this dearly. She appeals to the dissonant, the odd musical variables, the imperative narrative, and to her own high and hyper-feminine voice which is, in the best way, sonically disruptive. On her new track, "Lady Mary, The Fire/Pars Una," she chases the divine as though it were an ever-retreating vision, never quite attaining beatification but striving all the same. Ritual pop is still, after all, pop – still essentially earthly and therefore appealing in the way that pop music must be. Francine Thirteen’s work tickles the senses with rich tones; it is almost animal-like ('universal') in its gritty rhythms and grounded beats. And in that way, the Venusian, the demi-goddess, acts as a conduit between our present reality and some other unattainable world.

“Lady Mary, The Fire/Pars Una” will be featured on Francine Thirteen’s forthcoming EP, 4 Marys and the King.