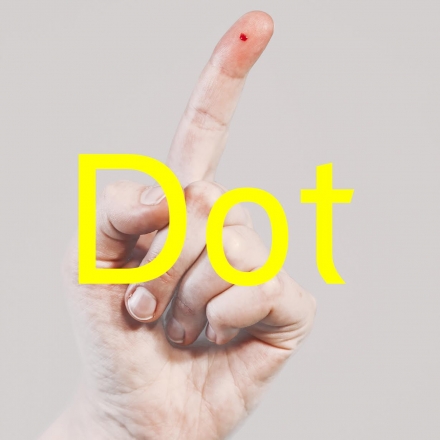 This past April, at a small venue in downtown Reykjavík, Icelandic producer Good Moon Deer's live setup looked misleadingly straightforward. A small table housed all of the equipment from which Guðmundur Úlfarsson played tracks off his newest album, Dot. He stood perpendicular to the audience’s gaze. To his right, and directly opposite where I sat, a video projection of ballerinas’ legs in faded VHS colors seemed to dance oddly along to the mechanical commotion.

Úlfarsson bounced. Each touch to his equipment seemed a touch of destruction. With every tap, the beat fell apart, the strings splintered, vocal samples abruptly ended. He bowed his head with every stride from right to left, delighting in the tumult he seemed to so easily generate with a touch of the finger. The disorientation was thrilling. And perhaps the only experience that compares to watching Úlfarsson break things apart live is listening to his debut LP, Dot. Ominous and brooding and yet bright, Dot is an opus of the Internet age.

Úlfarsson's background as a graphic designer, and more specifically a typographer, seems worth mentioning. Dot is designer's album, though not in the sense that it flashes or bedazzles. It holds to a minimal aesthetic, though not in the sense that it lacks. Admittedly, words seem to fail me as I attempt to arrive at what it is that Dot does. It is negligent but not under-done, it is ominous but not evil, it is masculine but feminine like a ballerina all the same.

There are eight tracks on the album, each one word long. Strung together, the track-list reads: And be gone after karma run love under. Strung together, these eight words seem to issue a warning, about the inevitable death of love in the face of insurmountable karma, the blindly ruinous forces of nature as they topple over the hopeful intentions of the human heart. Of course, I don't mean to suggest that Úlfarsson planted this message in his track-list, but only that the statement, "And be gone after karma run love under," seems to come from the same world that the album does – a world that is ruthless in its adherence to order (read: composition).

Úlfarsson gives vibrancy to techno, bringing the genre into dialogue with the more contemporary, if nostalgic, synth-pop sensibilities of producers like Nosaj Thing, Shlohmo, and Caribou. Úlfarsson is cautious, however, to conjure up the desolation of tech-age without resorting to the familiar sound of retro-irony. Make no error, Dot is playful, but it isn’t subversive. It merges the bright and the dark, the organic and the mechanical, without giving way to either one, without declaring a winner. It poses a question without succumbing to the pessimistic answers of apocalypse pop.

Part of Úlfarsson's success with this debut album owes to his skillful use of the human voice. On the seventh track, "Love," the bass line in the introduction threatens to evolve into an outdated bossa nova ballad. That is, until a disorienting child-like voice eliminates all hope for easy listening. I found myself laughing all through Dot, especially in moments like these – though here I mean laughing with Dot and not at it. The album has "just kidding" moments sprinkled all over it – moments when you think you know what will happen next, when you say to yourself, "Oh, I understand what's happening here" only to have your expectations dashed by atonal vocal arrays: the sound of karma eventually wreaking its havoc.

Naturally, what is most powerful about the notion of karma is that it is immeasurable. In fact, the saying, "Karma's a bitch" is founded on the false assumption that you can track the karmic outcomes of your actions. Instead yogic philosophy tells us that it is impossible to determine karmic end-results (making the concept all the more terrifying). In the same way, later tracks on the album seem to signal at earlier moments, seem to suggest a cause-and-effect relationship, but never answer the question definitively. The last track, "Under," features decorative flourishes on the piano, just as the first track, "And" does. But the parallel is not so neat as that. "Under" is not a reprise, and in fact the very idea of a reprise – which merely reiterates what has come before – is foreign to the universe of Dot. There are only incomplete connections here, only a riveting simulacrum of the chaos of daily life.