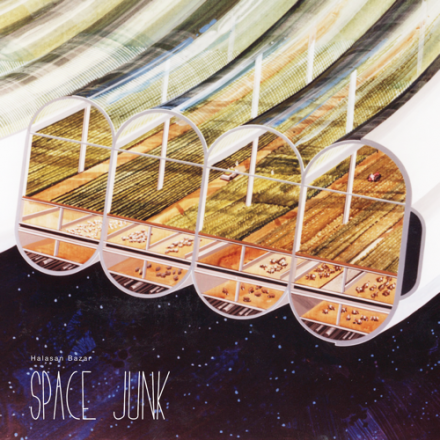 After a 7" on OOAOO in 2011 and a delightful cassette release via Moon Glyph last year, Copenhagen psych quintet Halasan Bazar are set to drop their proper debut LP Space Junk, a twelve-track offering that will see the band around songwriter Fredrik Rollum Eckhoff once again tapping into the inexhaustible well of 60s and 70s folk and AM pop. First single "Sometimes Happy, Sometimes Sad" should give you an adequate idea about the group's sound, which is as sunny and sanguine as it is subtly cloudy and twisted, frankly speaking just like the song's title bluntly suggests. The overall tone is blissful though, woth Eckhoff's crooning more composed and confident than ever, and before we let those accusations of tiresome retromania seep in, let's all just admit that this kind of music simply never gets old.

Space Junk is out April 2 on Crash Symbols.