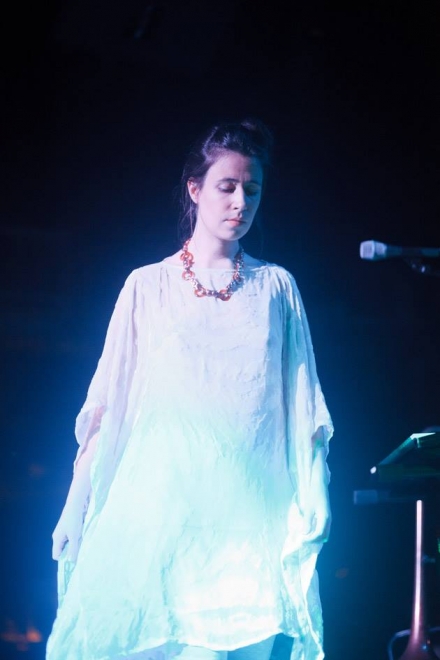 I first listened to GABI’s Sympathy on a ride around Berlin’s Ringbahn. It was one of those bright-yet-cloudy Berlin afternoons where you’re not quite sure where the sun is, and you’re overwhelmed with just how white the sky can be. Sympathy is equally overwhelming; nine tracks of elegant, sensitive, whimsically explorative and intuitive composition, drawing upon an amalgamation of genres ranging from orchestrated minimalism to experimental pop, electronic composition, Balinese gamelan and arcane folk.

GABI aka Gabrielle Herbst is trained in both composition and vocal performance, and it shows; she breaks the voice apart, down into its most basic elements, and composes from that point of reference. Sympathy is less about what Herbst sings (her lyrics are sparse, minimal, and at some points nonsensical) but about how she sings it. She truncates the voice into short bursts or articulation, hocketing with nothing more than a short expulsion of breath to form a skeleton around which the rich fleshiness of her cry, the anxious hesitance of her stringed orchestrations and the eeriness of distant percussion can wrap.

I sat down with Gabrielle a few hours before her recent show at Acud in Berlin to talk about Sympathy, intuitive composition, longing and synesthesia. Check it out below.

Sympathy is out on Software.

Well, I guess that I have a lot of different influences. I come from more of a classical background, so I myself have a really strong, deep background of studying classical instrumental music, and then studied composition at Bard with Joan Tower and also Marina Rosenfeld and Zeena Perkins, who was a visiting professor at the time. So that’s a huge influence for me, as well as all kinds of world music growing up, pop and rock, pretty much everything was in our household, folk, Americana. So for me music is, simply put, music is music, you know? And I like to not pay attention to thoughts of genre while I’m composing. Though I’m really interested in music that has a conceptual intellectual framework that drives it, my music does not have that, so I like to compose from a really intuitive place and write music that just particularly speaks to me. It's either something that I want to hear or something that, you know, really describes the state that I’m in at the moment or a feeling or a vision that I think is really inspiring in the moment and share that with people. I want people to go into a state when listening to my music and it's not really meant to be…well, it can be anything.

Of course it can be anything.

I hope that it kind of engulfs people in a sensual way and creates a state and mindset for them that maybe brings them to new thoughts or new feelings of themselves.

Sympathy especially feels like such an organic album. I was listening to it and hearing all of these influences, from Bjork to Reich to John Adams, especially when the songs really start to break down. What’s your process of composition?

Well what you were just saying, you know, [is that] the music has a lot of abstraction. But it's very deeply personal, so it’s sort of meant to be – not even meant to be, it became – a state of mind. As an album, it’s a state of mind, it's very organic to me, it’s very intuitive. How do I compose? Well, it really depends on the project. I also compose in a more classical vain, and I wrote an opera last year which was a fully notated score for a chamber orchestra of singers. That was composed in a way where I notated every single instrument. It was a very…classically composed piece, very set-- a set narrative and language for the conductor to take and work with the musicians and pull it off in three rehearsals, because everything’s there in the score.

With this album it was much more…there are certain notated sections and a lot of un-notated sections…I wrote most of the songs from a place of exploring my voice, not sitting at a piano and writing down specific notes, but experimenting with electronics, my voice and my pedals…my really simple loop pedal, and sort of creating layers and sounds I was drawn to and realizing that with my self, you know, I could create such a huge sound. And so that became the palate of the album, me exploring new terrain with my voice in solitude. And then I brought those songs to musicians who I work with, my band right now, and I said – or I notated – certain things. I arranged parts for them from a very vocal intuitive off the page free form place. So, very different. I have two sides to myself…there’s Gabrielle Herbst and then there’s GABI. And they’re different mindsets. I think they influence each other quite a bit, but they’re different personas.

The whole project is shrouded in a very specific aesthetic. Everything is coated in this whiteness and this purity. How much does visual culture play with your music, persona and (alter) ego?

Are you a synesthete?

I don’t really know, I do know that when I listen to music I see different colors and work from that place, so music for me is both felt and seen. It’s like vibrations in your body and visual fantasies. So visuals are super important for me always, but visual culture I think is…in the age that we live in now is a huge component of getting to know a musician and understanding and connecting with them. I’ve been working with Allie Avital Tsypin, who’s a really close collaborator, and it’s nice to work closely with someone who really understands you and your music. It’s nice to have that relationship when creating visual elements to the music. I want to go much further with the visual components of my live set.

There’s so much longing in Sympathy, especially in the last three or four tracks.  There’s this ache in it that’s so painful on one hand, but on the other it’s almost sublime. Do you feel like Sympathy wants to ask questions or to provide some sort of answer or closure or resolve in that longing?

I think both. It’s interesting that you brought up the idea of longing, because that’s really true. There’s a lot of that feeling in the music, but that sublime element that goes along with that is this sort of realization that the pleasure doesn’t exist without that pain and you need the two to define each other and you need the one to know what the other means. That’s the sublime uplifting nature of the longing, is to realize that it needs to exist and to indulge and have a catharsis and take it as it is and give it…accept it. That’s something that I sort of found for myself through the album that I hope can reach other people in the same way and [be] pretty uplifting for them. And, in the same way, I love the idea of people enjoying it, getting into a state while listening to it that is exploratory for themselves and brings them new sensations or new questions and is ultimately a soothing and loving experience.

You’re opening for David Longstreth soon at David Byrne’s Meltdown. That’s a pretty big deal. How’s it feel to be recognized as a peer in such an early stage of in your career as GABI? What’s next other than finishing up this European tour? Are you touring the States? Are you recording more? Collaborating?

Kind of, all of the above…I’m doing some collaborations, various ones, that are in the works or starting, so hopefully those will emerge soon. I love collaborating with people and interpreting their music with my voice, it’s really exciting. The dates in August are being set right now, so there will be another European tour around those dates. And we’re playing some US dates this summer, and a bigger US tour in the fall. So yeah, I think that the live show is a really important way to reach people. And I think where the label and I were prioritizing that as a way to connect with people. As you’ll see at some point, the live set is actually a really different experience than the album, which it always is with bands, but I think with this case performance is really important to me, a big part of reaching people. So, a lot of performing, and I’m already thinking about the next record. I’m really excited to write it. It’s not there yet at all, but I’m already, you know, imagining songs and thinking about new songs and we’ll probably start trying that in later shows, because that’s so much fun.