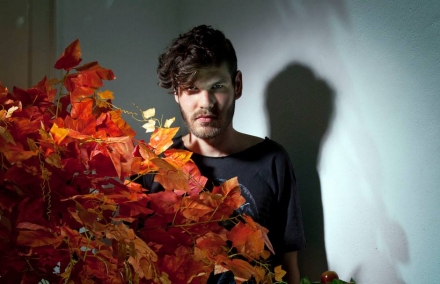 I'm sure plenty of us agree that Hungarian producer S Olbricht exudes plenty of novelty as well as mystery. To try and understand this better, I contacted Martin Mikolai, the man behind the make-believe legendary name, and asked him some questions.

Can you start by talking about your history of producing music? How long has it been since you started pursuing your attraction to synths?

My first experience with electronic music was in 1999, when my father came home with a software called Music: Music Creation for the Playstation. It was quite fun, I learned how to create basic sequencies and stuff like that, but it was just a game for me back then. I started to make music properly around 2003. I changed from the Playstation to a PC and began to compose pretty lame drum and bass tracks. But as I remember it was a good term for learning a few more things about electronic instruments and effects, besides I really loved to learn things independently.

A few years later Gábor Lázár joined me in this revelation what was quite obvius then, since we were neighbours and spent a lot of time together. We bought a pair of turntables and played music all day. And obviusly we produced a lot of ridiculous tracks and a few ones what were not that bad, but the point is that we motivated each other for doing things better and I think that fact determined our whole career in several ways. Around 2008 things got more serious. I released my first breakcore tracks under the name 'Poor Jiffy' and released a few post-avantgarde shit as M. Mikolai. We made two fanzines with Gábor Lázár and Gergő Szinyova called Odd Rain and Odd Train (Roger Semsroth aka Sleeparchive joined us for the secod one).

Then in 2010 I went to University of Pécs, Faculty of Music and Visual Arts. I took Electronic Music and Media Art which seemed pretty useful after many years of self-education. By the way I wrote The Last Act of Dorothy Stratten in Pécs during the second semester, and yeah, in 2012 we established our wonderful label, Farbwechsel, with Daniel Jani, Bálint Zalkai, Erik Bánhalmi and Balázs Semsei. That was the year when SILF was born. And it was also the year when I released my first tape under the name S Olbricht.

What are a few synthesizers that you'd like to make sweet love to?

Hmm... Sh-101... She's a classy one. A monophonic bass synth with a hand grip... sounds perfect for me. I love the acidic sound with a little portamento. It reminds me of the early IDM tracks I've been in love with. And my other fav is Sequential Cirquits Six-Track which is a polyphonic/multi-timbral synth. It's quite difficult to program it and to change the parameters but we use it with a UC-33 midi controller which sends CC for filter, lfo, etc. I'm in love with many other synths too like JX-3P, Jupiter-4, SH-1, etc (yeah I prefer stuff manufactured by Roland) but it would take too long to describe all these machines properly.

The careful maturation of Farbwechsel's roster is persistently impressive. Are we to expect more groovy 909 work like that of Christian Kroupa or is it back to the slasher soundtrack sound like that by Eril Fjord? What about any upcoming releases from SILF?

In the next few months we'll focus on groovy things. You can reckon on releases by G.W., James Booth, Norwell.. and a SILF EP is also coming soon. We'll release some debut vinyls also by Mike Nylons and FOR. And we also decided to repress a few things... so the next one and a half years seem quite busy for us.

Your otherworldly song titles are striking in their own way. They are half semantical, half not, harkening to science fiction's visions of the future of linguistics, or perhaps just hysterical or cryptic communication. Where do they come from, and how do they feed into your conceptual work around fictitious Stephan Olbricht and his love for Dorothy Stratten?

With these combinations of letters I try to reach impression of barely visible memos on a rubbed paper.. notes of a person who passed away a long time ago. The meaning of these titles based on my personal emotions and memories and somehow I think it's much easier to treat my past like a dead person... Like someone who doesn't exist anymore (I know, it sounds disappointingly dumb and boring).

I read in your interview with Electronic Beats that SILF came from Zalkai's term of endearment for his vintage synths. Meanwhile, S Olbricht is a character you created who actually got to be close to Stratten during her life in the1970s, as early synths were becoming popular. Is Olbricht at all your fantasy self, and is there a connection between 70s/80s aesthetic and music for you?

We were born in the mid 80s so we missed the synth-revolution and that's the reason why that part of history is quite myterious for us. Back in those days when the Dorothy album was born we were totally into the late 70s and 80s culture so it was quite obvious to find a connection between the story and the synths and the past. By the way, the particular story of Stratten and Olbricht was created by Bálint too, but he was absolutely counscious of my inspirations and intentions, what led me to make those tracks and that's why he formed a tale of a romantic-tragedy.

The Last Act of Dorothy Stratten is an eclectic, mostly melodic album, and furthermore a strong start to S Olbricht's discography; however, subsequent releases dwell more on the dissonant side. Your latest, Trancess, lends itself to the light from time to time, but mostly sits happily on the borderlands between uplifting techno and upsetting ambience. Farbwechsel overall conveys the same gamut. Does this back-and-forth say anything about an existing duality which you experience? Where does the inclination toward the sinister come from, although there is also plenty of moments of harmlessness and beauty in your music?

Hmm... honestly I cant answer that question. I mean these things are too close to me to see these differencies what others do.

Proto Sites is an exciting, pristine imprint that has already reinforced its competent style through its four releases. We're big fans. Can you say anything about your creation of your release for them? Did you approach anything differently?

Trancess was finished before Juraj asked me to give some tracks for Proto Sites so...no, I did not approach anything differently. Honestly I really like to collaborate with different people from different countries, especially in our region. I want people to see that we know each other, we respect each other's work because that's the only thing what boosts our scene.


How has the wave of Budapest and Bratislava-based techno artists who've gained international laud changed the local scene? Is there any type of techno tourism coming in? Do you plan on continuing to call it base?

The international interest sensibly motivates our whole scene in Budapest. I mean not just the artists but also the club owners and promoters have started think differently. As I see it, they're much more open-minded, they are full of ambitions and cooperate much more easily. I'm really happy to see that because one of our main purposes at Farbwechsel was to show people in the Hungarian music scene that they should stick together instead of pushing themselves towards some kind of egoistic street cred competition.