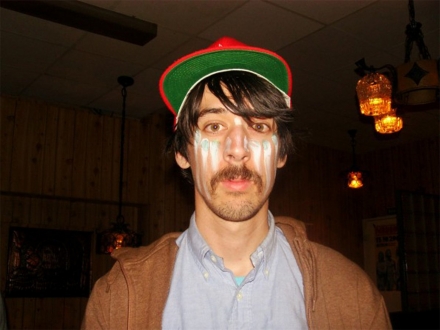 Long Beach, California is where Cameron Stallones has chosen to live and to work. The musician is one of the most celebrated experimental artists of our days. The music of his alias Sun Araw is a synthesis of various styles of krautrock, electronic, dub, funk and afrobeat. With his recent project Duppy Gun he collects and puts out dub music from Jamaica together with M. Geddes Gengras, a modular synth wizar he met in the L.A. experimental music scene. Although Stallones is featured on the soundtrack of our fav video game Hotline Miami, he isn’t a big gamer. What he does like is playing pool, eating noodles and petting animals. We asked him a few questions about zoos, pets, his artwork, veggie food and dinosaurs.  Read after the break.

Stallones and his band are presenting their latest record Gazebo Effect and are spinning records as Duppy Gun Soundsystem at ACUD on Sunday, September 13. No Fear Of Pop is media partner of the event. RSVP here.

Your hometown Austin seems to have a cool zoo. Did you go there when you were a child? What was your most favorite animal?

I went there once or twice, but the most prominent feature of the Austin Zoo was these commercials they had that ran endlessly late at night, they had this persistent jingle “Gotta be Austin – Zoo!” But the commercial was mostly just pictures of a tan deer running around in tan grass and tan wood and chicken-wire enclosures. Maybe they had a big cat of some sort, but most of it was local animals, kinda budget. We only had five TV channels so I’d see that commercial several million times in a single sitting. My favorite animal was and remains the giant tortoise. I had some powerful moments with some at the San Diego Zoo as a child, my grandfather was in San Diego. I’m pretty conflicted about zoos, but I’m pretty conflicted about a lot of things in human civilization.

Now that you are in L.A., what do you do in your free time? Do you have a pet to take care of?

I had an amazing rabbit for several years named Sissy Spacek. She only had one eye and she was a fantastic companion. She died two years ago or so, haven’t ventured back into pet world. For free time, mostly I play pool when I can afford it.

The artwork of your 2012 album The Inner Treaty shows a picture of an animal – what kind of animal is that?

That’s a good question and I do not know the answer. The important thing for me is that it is a fish that looks like it’s having a good time with it’s beak. You might notice that the back of the record shows a pack of hyenas tearing apart another hyena. Something about those two things existing at once. Or those two things being different levels of the same thing, more precisely.

Animals are sort of like eddies of consciousness. They seem flavored a bit less evenly than us, and so we can see them exemplify some particular essence all the way through their being, from the shape of their body to their temperament and special skills like bats with sonar or whatever. That can be useful for understanding aspects of ourselves. Some ancient people thought that a person contains all animals. That’s basically saying the same thing: they are effective illustrations of different states of the soul. Effective most likely because we are made out of the same stuff on a consciousness-level, which is pushing into the physical world and making shapes in it.

Are you an animal-friendly eater, what’s your favorite meal?

I am not a vegetarian. Lately I’ve been exploring this Szechuan world in San Gabriel which is a suburb of L.A. that has all the best noodles. I hunt for the noodles.

Let’s end with something philosophical: Were dinosaurs the better humans?