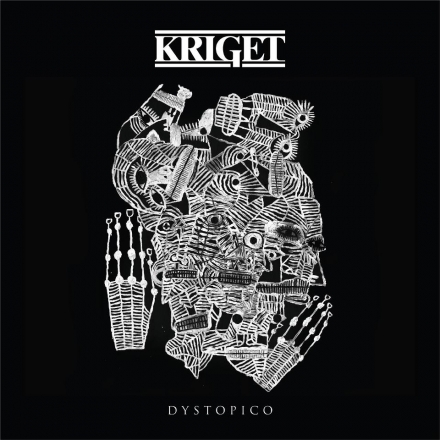 Kriget “He Lives in the Same Forest as Me” (exclusive)

As surprising as it is, the Stockholm-based instrumental trio Kriget have somehow allowed to pass through the mainstream (international) music media rather unnoticed. Whether it is a reason for this or not (and perhaps Kriget are just a wee bit too ahead of their time), we could perhaps argue that 2013 might not be the best year to release a record such as Dystopico; demanding every single part of your body to respond to their heavily Battles influenced fusion of free jazz and instrumental dance music. Taken under their said influences such as 80's electro/techno group Cybotron, electropunkers D.A.F, and the legendary german free jazz saxophonist Peter Brötzmann, Kriget accomodates a raw, scortching sound from an almost-scizophrenic viewpoint, while several tracks ("Say No More", "Dystopico", "Sleeping With Buddha") twist into organic, hi-hat driven techno — perhaps the most obvious reference throughout Dystopico's 43-minute long spin.

We're excited to give you all the exclusive first listen to "He Lives in the Same Forest as Me", an imperceptibly slower jam off the Dystopico, compositionally reminding us of Fuck Buttons' upcoming Slow Focus. The record is out via the new imprint BLVVD on July 2nd, including the US. Also, don't forget to check out the stunning "Sleeping With Buddha" below.