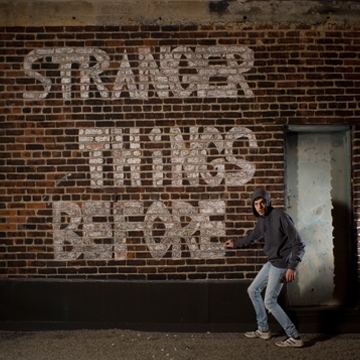 Perhaps the most enjoyable thing about Rakam's Stranger Things Before is how easy it is to imagine it never leaving the bedroom it was clearly created in. It could fairly be described as an attempt at pop music, but it exists in a space carved out entirely by its own gleefully freewheeling invention, and seems motivated exclusively by the giddy realization that there need not be a limit to what form that invention takes. The New Wave DIY disco strut of the album's only French language song, "Le Jazz dans la Rue", is buoyed brilliantly by Marc-André Roy's exaggerated cool-guy croon, reaching peaks of impassioned warbling that recall a Francophone Patrick D. Martin only to be interrupted by a surprisingly delicate Casiotone harpsichord arrangement. Another standout, "Long Island Beaches", is about as close as Rakam gets to a plausible love song and veers into slightly more typical synth pop territory, albeit with some spastic drum machine programming and another run at a 'baby's first Bach' harpsichord interlude. The album's instrumentals are consistently excellent, especially the wonderfully developed "Ocean Liner", which owes equal debts to Brian Eno and 8-bit video game soundtracks, and shades its own complexity with its charmingly understated lo-fi sound and more than occasional missed notes. That juxtaposition is probably the greatest strength of Stranger Things Before, as it allows Rakam to maintain a level of intimacy while simultaneously being as wildly expansive and imaginative as they care to be.

Stranger Things Before is available on RAKAM's bandcamp.