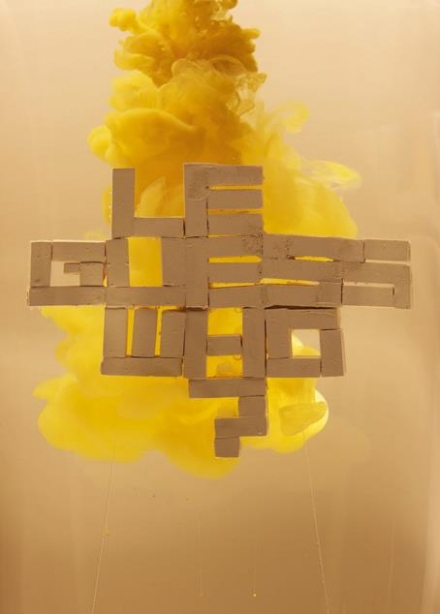 There surely is no lack of unique, challenging and forward-thinking music festivals in the Netherlands, with the lovely Incubate in Tilburg in September, The Hague's Rewire in early November, or of course the notorious megalomania of the Amsterdam Dance Event - to name but a few. This coming weekend from Thursday to Sunday, all music people should turn their heads towards the beautiful city of Utrecht, which will host the sixth edition of another festival that is not to be missed, Le Guess Who? A couple of weeks back, the organisers asked us to have a look at the breathtaking line-up, which sports names such as Matthew Dear, Fuck Buttons, Koreless, Mac DeMarco, Lucrecia Dalt, Grouper, DIIV, and countless other NFOP favourites, and pick one lesser known of them in order to briefly introduce and recommend the artist. The selection process was quick, as one of this year's most exciting (fairly) new groups/artist collectives is headed for Utrecht: Old Apparatus. Read about them below.

There has been a fair bit of bashing of the pop cultural phenomenon of artistic anonymity as of late, usually as a means to proceed with an "exception to the rule", a writer's trick that in itself is already becoming rather tiring. However, I'm totally with Tom Krell and his assertion that "anonymity has just become a completely formal gesture that's totally unrelated to any musical content", as he told Pitchfork's Larry Fitzmaurice in a recent interview, for his observation leaves room for a different approach towards the whole anonymity thing: There have always been ("always" meaning something like "in the post-Burial pop cultural landscape") two types of faceless artists, on the one hand those who remain anonymous for anonymity's sake, claiming to remain in the shadows so every listener can entirely focus on the "music itself" (and Selim Bulut is absolutely right to point out that this is absolutely impossible precisely because of the artist's anonymity). On the other hand, remaining incognito can be part of a larger, truly artistic concept that, if done right, manages to transcend the individual's identity to become an idea that stands on its own. Old Apparatus are this year's number one example for the latter category. With a strong identity that is not only expressed musically but equally relies on the visual aspects such as artworks and videos, Old Apparatus has (singular) become a musical entity in its own right. Acting as a true collective, of the four EPs that were released in 2012 via their own Sullen Tone imprint --Derren, Realise, Alfur, and Harem--, each of the last three was assembled completely by single members of the quartet, yet every single track put out is credited as a work of the group. It's still true that "throughout the three records you’ll hear the contrast and variation", and that "you hear the characteristics of each of the producers coming through", as the artists suggested in a very insightful interview with FACT in August - but once released as an Old Apparatus EP, all efforts become an inseparable part of the collective('s) aesthetic. Taken together, the 17 tracks amount to one of the most staggering examples of haunted, forward-thinking electronic music released in the past few years, with a panoramic sonic pallette that, despite its constant gloomy undertones, dips into almost every aspect of modern music, ranging from industrial, post-rock, hip-hop, noise, techno, to the whole kaleidoscope of contemporary UK bass. So whatever your plans are for the festival are, be sure you don't miss out on Old Apparatus. So far I haven't had the chance to see them perform live, but if their visual aesthetics as showcased in their videos are anything to go by, I'm sure it will be nothing short of mind-blowing.

Old Apparatus will perform at Tivoli de Helling on Saturday, December 1 at 10pm. Don't think about changing the venue too much that night, as the group will be preceded by Tim Hecker and followed by Beak>, Adrian Sherwood, Machinedrum, and Objekt.