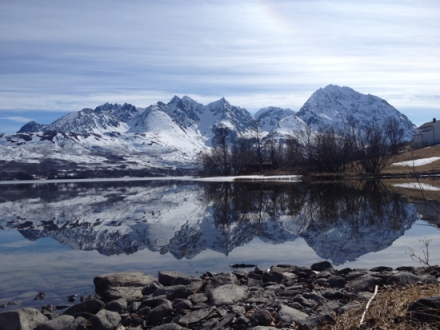 Norway According to Boska

I first met Jon-Eirik Boska two years ago at Torstrassenfestival in Berlin. Ever since, I am impressed by his work. Aside from his dance music project Boska, he plays drums with my most favourite Berlin band, Fiordmoss, and for Kaia, a new pop musician who just moved in from Copenhagen. In April he toured Norway with a jazz trio, and over the years has played various styles and genres, from Senegalese music to the orchestral Star Wars soundtrack. Jon-Eirik is somebody who lives and loves what he is doing. He tours, plays, records, teaches and practices more than anyone I know-- maybe he got it from his father who used to play in the famous '80s pop band Ken Dang.

Jon-Eirik is a storyteller, and I've heard many about his hometown Volda in Norway and all people he's met and places he's seen along the way touring through Norway and other European countries while playing his beautiful music to the people. With the recent release of his new EP, Cascades, I asked him if he didn't want to share a few of them. Read the feature after the break and listen to his EP below.

Cascades is out now. Get it over here.

My friends and I were djing at a party in Tromsø. It was amazingly fun, but at 3 o'clock we had to stop. That's how it is up there, the fun always stops at 3. And because of that there are after-parties everywhere.  So we ended up at my friends place accidentally because the door was open. Suddenly this "russ" (what we call high school graduates in Norway) walks in with a friend. Someone holds a short speech where he says the following: "It's really great to be here and to have fun. But we also need to remember that there are other places where things aren't so good. Like in Syria and stuff." We toast and drink to Syria and stuff. The friend of the russ also wants to hold a speech. But he is really drunk. He says something about "the man can hold his liquor." And proceeds to pour a tea cup full of gin for him and his friend. At the end of the speech he just drinks it. He was expecting enthusiasm. But the only thing somebody said was: "See you tomorrow!" He screamed for a while, shouting random stuff and punching his friend the russ. Finally he passed out, vomiting and pissing all over the rug. The host who is a doctor didn't say anything about it until then. I guess she was used to after-parties. Anyhow, she decided enough was enough and called for an ambulance, but they wouldn't get him. Then we called the cops, but they didn't get him either. So we took his phone and called his brother, who finally picked him up. When he walked in he said, "Yep, that's my brother."

The next one is clickbait. We have these crazy friends who decided they want to do a concert in Spitzbergen. But these guys are cool kids, they wouldn't do their show in one of those settlements up there called Barentsburg and Longyearbyen -  you can tell by the name the first person there suffered so much that they had to call it that way. Instead, they wanted to play at one of the abandoned mining settlements from the soviet era called "Pyramida." There you can find a statue of Lenin on the foot of a mountain looking like a pyramid. Mining and eating walrus was the only reason why people would go up there in the first place. We got there by boat, because there are no roads. We took all of our equipment with us and power generators, because there is no electricity. We also brought several guns. Because it is illegal up there to leave a house without a gun-- polar bears could eat you. Yes, they eat people! There are a thousand humans on the whole island, and 3,000 polar bears. This is not fair, is it? After our arrival we walked right in to an abandoned movie theater. Everything was covered in a centimeter of dust because nobody had been there for decades. We cleared space on the stage and tried to set up some fancy canvases for my girlfriend Petra to project some visuals. They recorded a music video in there and had an exhibition. The third day we invited people to a concert - but remember: nobody lives there but polar bears. Literally. It's a 4-5 hour boatride from the closest place. Still: 150 people managed to show up. The lesson is: It was a better crowd than the average crowd in Berlin. And remember, we were at an abandoned mining settlement at the north pole.

I toured in northern Norway for two weeks in May. I played with the father of a good friend of mine called Kaia in schools where we were teaching kids history and played baroque music in a modern way. The Lyngen Alps is a quite small area with mountains up to 1,500 meters high. Right now it's full of ski tourists too. All of northern Norway is very awe inspiring. It's full of these mad landscapes. You could drive endlessly without seeing anyone. No houses, no cars. The Lyngen Alps are particularly brutal. We were driving on a beautiful sunny day, the white mountains around us. We were on the way from one little village to the next. We were driving by the fiord and suddenly there was a lake at the foot of the mountains. We had to stop the car and to go outside. It was so magnificent. It was warm. Four geese took off from the lake, large black and white ones. Most of the water was frozen. I almost cried, it was so heartbreakingly beautiful. With our iPhones we pathetically tried to capture the splendor on our three inch displays. That's when a colleague received a message, which brought him back to reality  "I am getting an invoice," he said. It seemed completely absurd. When we arrived at the school we asked the people how it feels to live in such a place. They weren't impressed at all. "We are just used to it," they said.