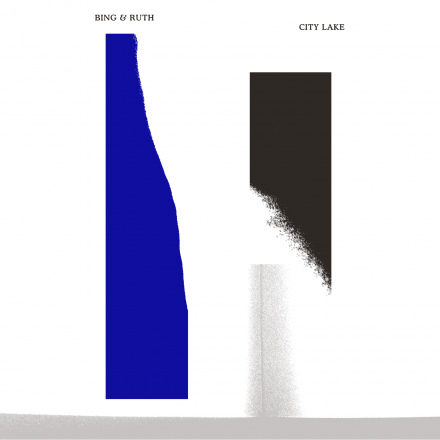 With all of the classical music posts we've been seeing here lately, it would of course be good to include something from Bing & Ruth. City Lake, a re-pressing from days that preceeded the arrival of Tomorrow Was The Golden Age, is a full spectrum of urban scenes and sonic beauty implicitly celebrating the human condition,  triumphs and failures alike. From the cinematic delight of "Rails" to the abridged and geometric storytelling of "Broad Channel / A Little Line in a Round Face," City Lake is a pictutre of Bing & Ruth as an open door. The door is propped open with a door peg, a signaling invitation established by someone at an earlier time who is typically marked as thoughtful and at times shy. Outside of the doorway is a vast and sunny field, a remodeled elysium, like the one witnessed in the video for "Broad Channel:"

What if you can't make your way through the doorway, though? For whatever reason, it just isn't working: you see it, you see people approaching and passing through it, and you see the attractive warm grasses beyond the boundary. Alas, you aren't drawn or guided towards it. It's like a scenario in which you are not being let in on a group secret. There are hints being tossed your way, but no questions being answered, no inclusive or explanatory language on offer. Instead, there is denial and cover up, and no one is available to sit down and translate it to you.

Now, think of the emotions triggered by a memory of feeling excluded: fear, regret, confusion, rebelliousness, will to fabricate and/or locate a flaw in the system, preparedness to expound upon said flaw, impulse to overcompensate, and other complexities.

For me, the fanfare around Bing & Ruth is a league that I feel excluded from. I do not understand what goes on beyond the boundary that separates my tastes and tuning from what the orchestra graciously creates. Outside of my sphere, it is consumed passionately. I have an appreciation for orchestral soundscapes, in particular the intersection between classical and experimental. Systems/Layers by Rachel's, a brilliant 2003 release that followed up a steady and monumental discography of conceptual as well as biographical scoring, continues to serve as a personal beacon when sauntering through the boreal depths of modern (and underground) classical. Further, several pieces from Nina Nastasia and Set Fire To Flames have served as keystones within my second phase of musical maturation (forced techno separation – early 20s). Thus, I do not feel fear, regret, or rebelliousness when it comes to my reluctance with Bing & Ruth. Confusion, a little; fear, no. I know this style, genre, and sentiment. So what is it? If Bing & Ruth bear some implicit celebration of the human condition, perhaps I feel like they accept me for not having the same tuning, and that's that. Perhaps I admire this music's type of low-impact commerce yet significance in which it is taken in by others. It has such nepenthe contentness but no net in their casts.

For music so resonant, it is odd to think that it does not resonate with all pairs of ears. Still, the fact that Bing & Ruth is perched on resonance does not automatically mean it will have a resonating effect on one's taste. It leaves me driven with curiosity, similar to the one depicted by the wanderering man – futuristic Quaker journeyman – in the video for "Broad Channel." Fearful, astonished, and unsure of what to do, he stands in the sand, peering into spinning galaxies on disguised and statuesque bodies. We are shown his throbbing absorption of this bizzare display, and try to understand it on his behalf. Is it about macro/micro, or the old tenet that some things are meant to be neither understood nor all-inclusive, nor make any sense?