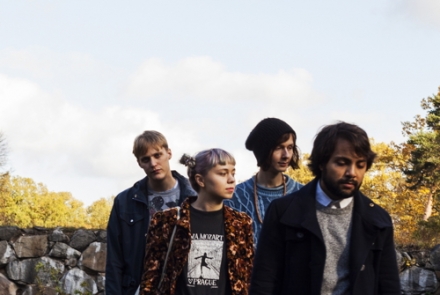 It is a generalization to say that there is a fundamental difference between being a musician in Europe and being a musician in North America; one depends on an economic infrastructure while the other on a web of interconnected communities. It’s a generalization, but it is an essentialism that keeps resurfacing. There’s more public funding for the arts in Europe, being a musician is legitimized. With greater clout comes money, and the industry doesn’t seem to be collapsing like it is in America. There are more promoters, bookers and labels. And, for the musicians themselves, practice follows suit: Artists seem to turn more inwards on this little continent. Maybe it’s America’s longstanding rhetoric of DIY ethics that has kept that tradition alive, but these days, with their industry crashing and burning, it seems deeply practical to play in your neighbor’s basement instead of the club down the street. Being in a band with your friends is how to survive.

So when Stockholm’s Star Horse sell friendship bracelets as merchandise and organize the grassroots Fuzztival music festival intended to nurture a community, it comes as a pleasant surprise. The band, led by Maja Thunberg and Andreas Ryberg both on guitar and vocals, have been honing their shoegaze sensibility since 2011. What gives Star Horse their emotional resonance is the conversational dynamic between the two singers-- none better exemplified by their new single “Slower Now.” Thunberg’s melody soars while Ryberg interjects each chorus, “Come to me,” and she answers back carrying some obscured narrative along. Beckoning a lover or friend, this is a song that belongs to everyone.

Stream “Slower Now” exclusively below. The 7” single along with its B-side “Wherever You” comes out June 9 on Star Horse’s label Häxrummet Records and is available for preorder now.