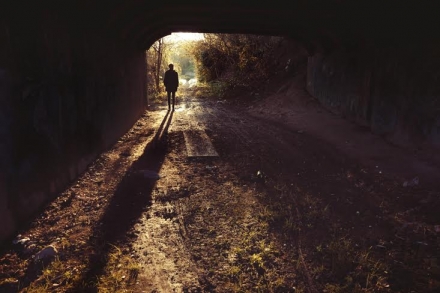 Within the world of lapsteel ambient guitar music - admittedly, one that provides very small margins for comparison - STROMBOLI seems like a stylistic outlier. Rather than ponderous or contemplative, STROMBOLI's take on ambience is evocative of the synthetic fang-baring of Italian slasher-flick scores from the mid-60s. On top of that, STROMBOLI's uncharacteristically aggressive approach to rhythm feels more akin to a dance-punk act like Liars, kicking against the notion that ambient music cannot move at any pace other than 'glacial.'

"Low Radiation" is a track from STROMBOLI's upcoming debut EP for Maple Death Records, and it briskly captures an almost punk attitude to which STROMBOLI seems hell-bent on associating with ambience. A coarse, repeating beat, which sounds like small pockets of air eploding in rapid succession, gives "Low Radiation" an immediacy that is very atypical for a genre that is historically more aligned with ponderous journeys through tone and waveform than a fast-approaching horror. "Low Radiation" is an immediately graspable package that still manages to meet one of the most important requirements for ambient music: that it sounds accidental, having emerged from your surroundings through the blind luck of some uncontrollable natural process.