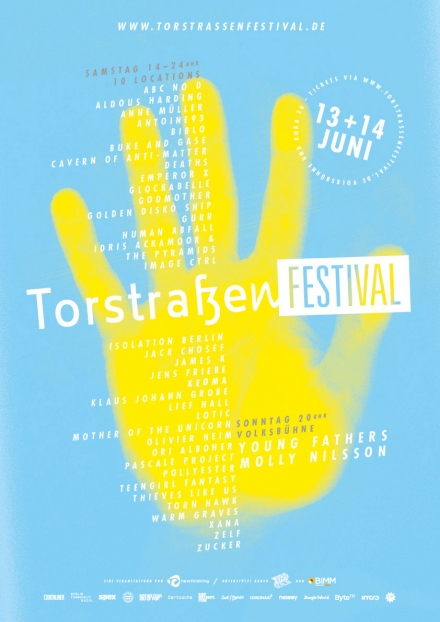 First things first: For those of you who are experiencing a feeling of confusion and disorientation right now, silently wondering in mild despair, "How did this year pass by so quickly?" – fear not! Your memory and sense of time are totally fine. Due to a couple of more or less interesting, somewhat disruptive circumstances (in case you're actually wondering: the end of Berlin Music Week, its replacement Popkultur, and in some way probably even this superfluous oddity named Lollapalooza® Berlin), NFOP's favourite local music event Torstraßen Festival has been moved to early June instead of the last weekend of August. From now on marking the beginning of the summer festival season rather than its end, the shift entails the additional benefit of further underlining the humble festival's forward-looking, adventurous stance that keeps focusing on both Berlin talents and artists positioned subtly yet firmly left of the field.

Unlike the last years, the fifth edition of TSF not only occupies the better part of this weekend's Saturday but will have a bonus night on Sunday, with an official closing concert at the mighty Volksbühne. No Fear Of Pop is once again proud to be official media partner of the Mitte brouhaha – and as things are already so close, please allow us to make some recommendations for the festival below. Be sure to check the complete schedule in a neat map over here.

The cosy little pub will be coloured in red and white for an all-Canadian experience with some of our favourite artists at the moment: Berlin resident and Urban Spree master of sounds Lief Hall should be familiar to our readers by now. Her recent show at West Germany featured some staggering new material, so you should definitely come by at 5pm to finally check her out if you haven't done so yet. Lief will be followed by recent Berlin via Montréal transplant Antoine93, who you might also know already from his superb performance at the NFOP four-year anniversary bash at Sameheads last year in February. If not, be there! Antoine now comes with the additional merit of having been selected as one of the three Welcome to Berlin participants for some extra fame courtesy of our friends at BCR, i-D, and Musicboard. Well deserved, we'd say (we've also voted for him, cough). Antoine93 will perform at 7pm The maple leaf trio will be completed at 9pm by wonderfully out of control Pascale Project aka Pascale Mercier fka Mathematique. We recently had the honour to interview her and premiere the first single from her forthcoming LP, check that out right here.

Volksbühne's Roter Salon is set to host some serious Berlin art school vibes with appearances by local luminaries Deaths at 6pm and Golden Diskó Ship at 8pm. Just like Antoine93, the former have just officially been announced as participants at Welcome to Berlin, and the video for "Sold" should be sufficient to tell you why. Comparisons to various hyped projects have been made by others, but we don't do such things. Mostly. Usually. Sometimes. Compared to Deaths, multi-instrumentalist and Berlin Current alumnus Theresa Stroetges aka Golden Diskó Ship is almost to be considered a veteran, having performed at Berghain's main stage opening for Kuedo and Forest Swords last year. Stroetges' take on contemporary pop is sophisticated and remains pretty unique this side of Berlin city limits, and the dignity of Roter Salon seems like the appropriate venue for this sort of thing.

So, we like Hamburg duo Zucker. We like gritty guitars and we think Ramones covers are okay if translated into German and post-ironically performed by two women. We even think that they can pull off naming a song "Trümmerfrauen". This is punk, after all. No post. Then again, their Soundcloud states "Genie-Noise-Minimal-Avantgarde-Pop". So indeed very post, after all. Come see for yourself and argue with us about classification. And listen to something German, ffs. 7pm. By the way, we are aware that we just said that you should be at Gaststätte Prassnik at that time as well. But that's really not our fault come think of it. The same issue reoccurs two hours later when Istanbul-based Biblo enters the stage at Ackerstadt Palast, and here we're truly conflicted. We stumbled across this highly talented artist two years ago when she collaborated with Brazilian beatsmith Pazes, but her solo stuff is actually so much more compelling, which is why her show would deserve everyone's undivided attention – were it not for all the other things going on simultaneously. We're afraid that we really can't help you here.

Dark and forward-thinking, Platoon is responsible for the artsy electronics. Torn Hawk, to whose 2014 Let's Cry and Do Pushups at the Same Time LP on Mexican Summer you absolutely need to listen to, is one of the many guises of Luke Wyatt, and it's arguably his most adventurous and compelling venture. See for yourself at 9pm (if you're not somewhere else, see above). Teengirl Fantasy on the other hand shouldn't need an introduction, really. The Brooklyn house veterans and nicest guys ever (who I interviewed for EB years ago) return to Berlin for a one-off show at 11pm. The duo's most recent material shows laudable creative development, so be there.

And on and on, there's so much more to be seen, so let's quickly point to Emperor X, who will present his very own take on familiar folk tropes at Z-Bar at 4pm. If you're a reader of this site and/or came to our five-year anniversary at Urban Spree the other day, you'll already know what to expect from a Godmother show: the most queer fun/fun queers in town. Usually only coming out after sunset, their 5pm spot at Sankt Oberholz is one of the rare opportunities to see them in broad daylight. Just in case you need further arguments. Speaking of queer culture, Lotic's widely reported response to the recent GFOTY and Ten Walls outrage is today's essential reading material. Once you're done with that, be sure to see his avant-garde approach to contemporary culture live when Lotic exhibits one of his live performance/DJ set hybrids at ACUD at 10pm.

As already mentioned above, this year TSF will feature a second day, which really consists only of a highly compelling closing night at the Volksbühne main stage: the excellent Young Fathers will share the evening with Berlin mainstay and local pop majesty Molly Nielsson – the appropriate way to end what is set to become the most exciting edition of Torstraßen Festival yet. See you on Saturday.