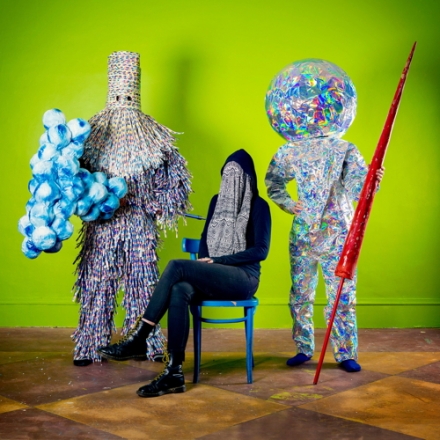 There are basically two ways to do an Elton John cover. You can either make an attempt to out-romance the master himself, in which case you should ensure that your video involves tiny cats and Super-8 videography. Or you try something else, like going all meta for instance. Enter Bristol-via-Poland artist Wojtek Rusin, whose work as Katapulto has been described as "kinda like a brighter, ostensibly straighter adjunct to Autre Ne Veut", a comparison not necessarily obvious (or convincing) if the two didn't happen to be championed by Olde English Spelling Bee, still one of the most important underground labels of the last five years. For "Blue Eyes", a song taken from his recently released full-length Powerflex, Rusin not only reinterprets the original itself, turning it into the greasy synth anthem John actually should have come up with in 1982. Almost carrying the joke too far, on top of that he encroaches on the video, extracting the original's overblown white grand piano and presenting it in glaring high definition, before rather literally deconstructing this ultimate symbol of decaying pop grandeur.

Powerflex is out on Olde English Spelling Bee. Get it over here.