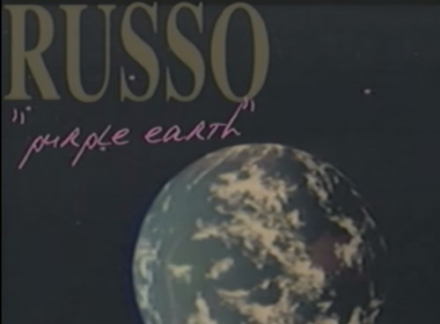 Newcomer to the Valcrond Video realm Ari Russo has excellently accented the driven, inquisitive mood of his track "Purple Earth" with Valcrond-appropriate imagery. Drawing stylistically from the material aesthetic of black plastic juxtaposed against green, boreal settings, an artist-specific approach awesomely called "OfficeFern," Russo's music reflects the texture and ether of such a juxtaposition. With "Purple Earth," the beat drags simiarly to the way a lot of Torn Hawk's work staggers and laments the end of the age of discovery (the 1980s); but, if hearing Russo's work by itself, without knowing that it is a Valcrond release, I wouldn't necessarily think it sounds like Torn Hawk, that is, they're similar but not alike. There's an essential difference in Russo's sound, perhaps it is the clarity and looping in tighter rhythms. Torn Hawk's loops are wider, and more protracted. I would, however, if hearing the music for the first time under impressionable circumstances, jump up to see who the artist was because the synth's pulsating repetition is just right. Then I'd get pulled into a happy daze of romantic feelings about the array of 80s throwback footage and the pace at which they fly around. You might get pulled into the same daze.