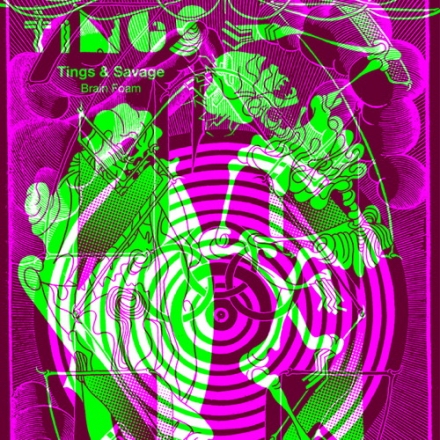 After dropping a glistening house 12" on LA-based NNF-offshoot 100% SILK, Melbourne native Rohan Newman aka Roland Tings did what you gotta do these days and took off to Berlin to soak up this city's fake-bohemian music scene. Unlike many of his compatriots, however, it turns out that he actually got something done while staying in town, and the key to that was, rather unsurprisingly, discipline: "Each day in mid-2012 at around 10am", so the story goes, he'd meet with his friend Nathan Savage at a studio "in an old converted governmental administration building next to a scrap yard on the canal" and "sometimes stopping by Berghain for a few hours on the way in", both probably just to perpetuate the cliché. Sorry for being a bit sarcastic, as there's actually no real need. The result of those morning sessions, Tings & Savage's Brain Foam EP, is a supreme instance of effortless yet sophisticated, immensely playful improvisation, naturally much rougher round the edges compared to Newman's Milky Way EP, landing in that unmarked territory somewhere between ambient, noise, and rugged techno that actually does not all too much sound like the city it was conceived in. Below, watch the aptly psychedelic video for EP standout "Sequins".

Brain Foam is out today on Vancouver's 1080p, Richard MacFarlane's new tape imprint which we introduced last week. Get the EP right here.