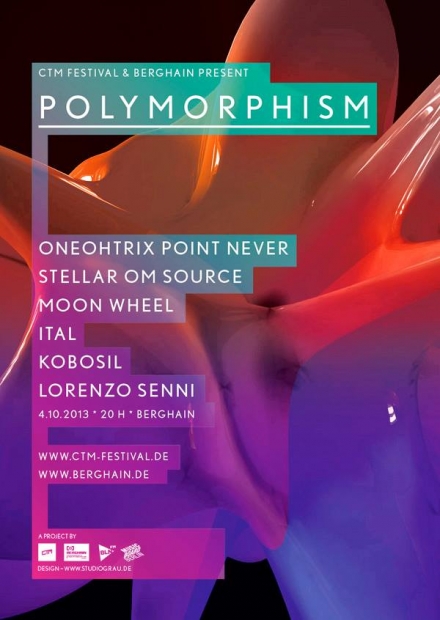 As I've said myself probably a hundred times at various opportunities, for example here, Berlin is a city that is not easily grasped in terms of music when it comes to both 'scenes' and genuine innovation. It's easy to get carried away by that fact and to keep complaining about it, especially in view of London or New York, and I am certainly guilty as charged when it comes to that. The smarter thing to do, no doubt, is to make an attempt to actually explore and map the musical undercurrents that exist in Berlin probably like in no other city at this very moment in time. Enter Berlin Current, a new joint initiative by CTM, Berghain, Boiler Room Berlin, De:Bug, and BLN.FM, and sponsored by the surprisingly forward-thinking and interventionist (in a good way) Musicboard Berlin. Putting "an ear to the scene and presents new, future-oriented musical ideas from Berlin", the project will showcase selected young talents at various events in the coming months. There's some more conceptual underpinning over here (including a definition of pop that's convincingly/alarmingly close to our own), and a list of currently selected artists right here. It's a very compelling list indeed.

The first two musicians to be highlighted are "Neukölln native" Kobosil and Moon Wheel aka Olle Holmberg, a Swedish expat whose music neatly falls in line with recent North American tape-induced psychedelic experimentalism. If you happen to be an avid reader of this site then the name should sound familiar; in fact, Holmberg supported the great Dylan Ettinger at one of our very first showcases at Mme Claude back in October 2011. Earlier this year, LA powerhouse Not Not Fun released the strongest Moon Wheel material to date on a self-titled cassette. In anticipation of forthcoming events, we briefly spoke with Holmberg via email. Read the interview below the break.

This Friday, October 4, both will perform at Berghain as part of CTM's Polymorphism #8, supporting a truly breathtaking line-up that features Oneohtrix Point Never, Stellar OM Source, Lorenzo Senni, and Ital. More details over here. See you there.

How long have you been making music?

For ten or fifteen years. Can't remember exactly. Started out in QBASIC and FastTracker II in MS-DOS as a teenager.

When and why did you come to Berlin?

In 2011 I got kicked out of Australia and didn't like the vibe back home in Sweden. I checked out several other European cities, but when I visited a friend here I decided to not leave.

Does Berlin inform the music you make in some way and if yes, how?

It taught me how to dance, which lead me to explore music with more corporeal intention.

What do you think about the city's music scene and opportunities for musicians?

In the beginning it was not difficult to get small shows, and the rest followed slowly but steadily. I've met some very talented, generous and encouraging musicians here that helped me grow. However, I wish the corporate infiltration of our culture would cease, even if it meant the spectacle became a bit less shiny.

How did you get in touch with the NNF people?

I emailed Britt the first three Moon Wheel songs right after I'd written them and he asked for more. Two years later I sent him the album when it was finally finished. I was afraid he'd forgotten about me, but was still keen.

What is your setup on stage, and what is the relationship between your recorded tracks and your live improvisations?

Varying bits and pieces (controllers, fx, keyboard, drum machine, sequencer, guitar) plugged into a hardware/software sampler with some additional software behind it. It varies from show to show. Most of my recordings are live jams from the studio, so to take it to a show feels like a natural step. Spontaneous arrangement and intuitive jamming from sets of sounds and patterns.

Is playing at Berghain for the first time an exciting or rather intimidating imagination?

A dream come true. I feel humbled to be given the opportunity by CTM even though I'm unknown. When I asked somebody who has played there for advice they said it's like driving a tractor. Grandpa showed me how to do that, so it should be fine. Just hoping it'll be as loud as it should be!

Moon Wheel's self-titled cassette is out on Not Not Fun. Get it over at Boomkat.