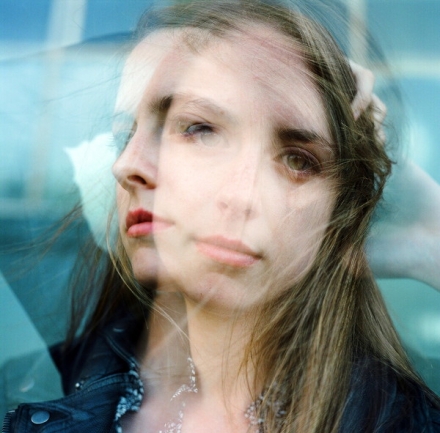 San Francisco-based producer Avalon Emerson has been on our radar for a good while now, so the recent news of the imminent arrival of Emerson's debut physical release, the Pressure/Quoi! 12", met our unashamed excitement. The vinyl includes four tracks – two new productions by herself, and two different remixes on "Quoi!" on the flip side, both provided by German duo Tuff City Kids. In anticipation of the release, we've talked to Emerson via email about her work and the electronic music scene in the Bay Area. Read the interview after the break.

The Pressure/Quoi! 12" is out January 13 on San Francisco's Icee Hot. Stream clips below.

You've been producing tracks for a while now, but this is your first – physical, "proper" – release. When did you first start making music, and when did you start DJing?

I was in a couple bands in highschool, but I have never been a fan of 'jamming', or really collaborating with other musicians beyond a remixing relationship, so pretty quickly I fell in love with producing and the studio environment. I was the go-to person to record, mix down and produce my friends' music. I have been working from a scrappy DIY, experimental perspective, systematically teaching myself what I needed to know on pirated software, borrowed microphones, and faking-it till I make it trial-and-error. I began really DJing when I moved into this 14-person warehouse in SF's SoMa district. I was 20 at the time, so it was the only place that was available for me to play in the US. I didn't realize then but soon found out that playing all night at private warehouse parties was actually MUCH more fun than trying to cram a decent vibe into 50 minutes in between local electro partyboys or warming up for apathetic indie band bros scraping together a boring serato set.

How would you describe your development from your first tracks to "Pressure" and "Quoi!"? I find them both a bit harder, perhaps more leaning towards techno compared to the first ones. Has something changed regarding your influences or the stuff you're into?

I believe if you want to get good at something, do it in a constant, tight iteration loop, and take advantage of the public stage the internet and blogosphere affords. When I was just starting out, I released a track a month for about a year (made many more that never saw the light of day) on Soundcloud. I feel like I've gotten over most technical learning curves, and I'm at the point where I feel very efficient at translating the idea I hear in my head into audible tracks. I've learned a lot, technically from working with Christopher Willits, who helped me mix down "Pressure" and "Quoi!!", and my new release with Spring Theory later in 2014. A lot of this stuff is actually quantitative science, with rules and best-practices to learn and formulate a framework to creatively work within. When I listen to some of the stuff Carl Craig and Kevin Saunderson did 20 years ago I know I still have a TON to learn. It's exciting.

How's the electronic music scene in the Bay Area? How is the situation concerning spaces to make and perform such music and to throw parties?

There is no shortage of talented, driven and creative people involved in music here. The influx of tech money, even since I moved here in 2009 is palpable, and is most felt in the club/nightlife industry. Every big city deals with something similar, the dramatic struggle between the traditionally warehouse/industrial/club areas of town, and the new MBA's who are moving into the new, multi-million dollar condos next door.

You've visited Berlin before. As an artist producing electronic music, did you find the city immediately inspiring? What clubs/spots/scene did interest you in particular, and did you find anything you're missing in SF?

I had always heard about people coming back from visiting Berlin and just gushing about how awesome it is. It can be kinda annoying (though I'm very much THAT person now too). To say Berlin today has achieved an impressive level of professionalism when it comes to techno is a boring understatement. I'm from Arizona so I know the cold would eventually REALLY get to me, but I would like to try out living there for a time.

How did you get in touch with the Icee Hot crew?

I've known the guys for a while. I was an intern at XLR8R when I was 20. And I even used my fake ID to get into (editor in chief of XLR8R and co-founder of Icee Hot) Shawn Reynaldo's old party Tormenta Tropical. I went to the first Icee Hot parties and Will and Ryan (Ghosts on Tape) have been friends for a while. I'm very impressed with what they have managed to build in such a short time and super excited to contribute to the label.

There's a lot of discussion going on this year about the position and role of female producers within electronic music. What are your thoughts on this, from your personal perspective, would you agree that women are still marginalized in this field? What are your own experiences regarding being booked, or concerning journalists covering your music?

So, during the day I'm a Ruby on Rails and UX dev working in SF tech. It's an understood and boring fact that men grossly outnumber the women here too. Just like in electronic music, I keep an open mind and try and go into every situation with the best intentions, do my job the best way I know how, and help to be an example for the future generation of women who want to enter a predominantly male field. There will always be the few faux-alpha-male-red-pillers out there who want to remind all the little ladies of their place, but they're a dying breed and I'd rather not focus on the few bad apples. For the most part, whether in tech or in techno, I think women bring a unique and valuable perspective to the table. At the risk of sounding cheesy and namaste, all genders, races and orientations dance and listen to music, and the more voices we get to hear from, the richer all our experiences will be.

What's coming up next? Any further releases or even a full-length in the works?

Working with the hyper-talented interactive 3D artist Cabbibo for a piece to go along with "Quoi", which will be beautiful. Then after the Pressure/Quoi! EP comes out in January, I've got another 12" coming out on a new SF/Paris label called Spring Theory in the spring, which I'm fantastically happy about. Right now I've got about a full-length's worth of material I'm trying to decide what to do with. Records take a long time, man! Gotta be patient!

Are you planning on performing outside the Bay Area or go touring sometime soon?

I love going down and playing parties in LA and I've got a couple of those lined up. The low density and year-round warmth of the city makes it perfect for cavernous warehouse parties downtown. I'm also working with a crew up here on a party series called Play it Cool. It's a roving party where we go crazy with the decorations, bring in real DJ's DJs to guest, and I even built this scrappy lighting control rig out of a bunch of dimmers and a photo box to control a bunch of lights to the music. We're having a lot of fun with it.