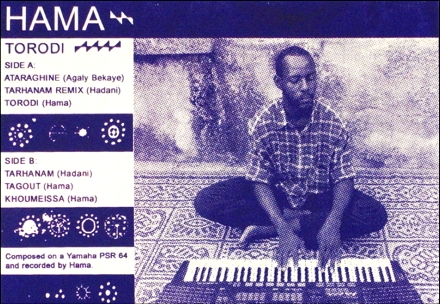 Throughout our conversation, Hama referred to his synthesizer as a piano. This is telling. The Niamey-based musician insists that his music is, all in all, traditional Nigerien music – despite the futuristic quality that the vibrant synth tones and processed drum-kits lend to Hama’s latest album, Torodi. It’s perhaps this play on the ancient-future that has brought Hama such critical acclaim across The Republic of Niger and the countries that surround it; however, Hama’s music was virtually unheard of in the United States until Sahelsounds, a record label founded by ethnomusicologist Christopher Kirkley, which features the music of 50+ musicians whose music Kirkley came across during his travels in West Africa.

About the futurism of Hama’s Torodi, Kirley says, “I would say it's futuristic in the sense of the innovation, being the first person to do this – programming the traditional rhythms on the drum machine. I don't think he's necessarily composing with that in mind – the songs are really folk guitar songs that he has worked out versions of on the piano.” Hama’s thoughts are similar. He calls his compositions “modifications” on music he has heard and collected over the years, including traditional music, but ranging from contemporary American pop music to Detroit techno.

In many senses, my coming to hear the album at all was a matter of serendipity. “Sahelsounds became a record label by chance,” says Kirkley. “I had lived in West Africa for two years and was back home in Portland. I had a blog, but no intention to turn it into a label. I met the folks at Mississippi Records who suggested releasing a record. After time it's turned into a label, somewhat reluctantly. There's a demand for the music, people in West Africa can get exposure, get paid, and I can finance trips back to West Africa and have a part in releasing what I think is important and overlooked music.”

When I first called Hama, he expressed being quite happy that I’d taken interest in Torodi. I, on the other hand, was surprised to find that no one had yet interviewed him about it. The compositions, to my ear, are significant insofar as they provide a point-of-reference for modern American Afrofuturism. Though I may be alone in drawing such comparisons, when I tune into Hama, I can’t help but hear the synth drums in the intro to Kelela’s track “Cut 4 Me” or certain elements of FlyLo’s “Turkey Dog Coma.” Or even, reaching in a slightly different direction, Phil Cohran’s “The Dogon” from the 2010 album, African Skies.

Hama and I spoke in a mix of French and English, each of us struggling to overcome the language barrier. (As a result, I’ve translated the parts of our conversation that occurred in French into English.) In many ways, it is a conversation I am still processing. I wonder, in particular, whether music can do the work of Afrofuturism without doing so deliberately. I wonder whether it is misguided to hear the future in something that insists that it is, in fact, traditional. Nonetheless, Torodi is an important release for its innovation, regardless of whether that innovation seats itself in the past or in the future.

Read the interview after the break.

When did you meet Christopher Kirkley?

It was around the month of November in 2014. Christopher asked me if I wanted to go on tour and I said no problem, because I’ve been playing music for a long time, since 1986. I was very young when I started composing. I’ve used mostly the piano, the synthesizer. I play the guitar a little, but I play the piano much more. I program everything on it. After creating the beat, I add the melody. But I don’t compose on paper because when I started playing music, it was just in my house. I didn’t have a teacher. So the music is very traditional; it’s not modern.

That’s interesting. It has a futurist quality –

And has it changed over time?

Yes, very much. When I first started playing music, I never thought it would reach the United States. And I have a lot more albums than Torodi, which are much better.

I made Torodi a long time ago, around 2002. Since then, I’ve produced ten more albums. But Torodi is the album that everyone likes the most.

Why do you think that is?

Well, my music is for everyone. It’s reached Algeria, Libya, Mali – everywhere. In a sense, everyone hears the music but they don’t see me. They don’t know me as a person. They don’t know who Hama is.

I am Hama. I mean, for example, I have a friend in the States, who lives in Iowa. In 1992, he was here in Niamey. I learned a bit of English while he was here and I spent a lot of time with him. After six months, once he finished his work here, he went back to the United States. One day, I called him and asked him if he knew that I play the piano. He didn’t believe it. So I sent him my music and he said, “Wow, why didn’t you tell me this before?” So we’ll see what happens in the future. I hope my music goes far. I know how to compose all kinds of things – techno, rap, zouk, traditional. I have it all in my head.

Zouk? Do you have zouk in Niger?

You know about zouk?

Yes, I’m Haitian, so I’m familiar with Haitian zouk, but I don’t know anything about Nigerien zouk.

Oh, no. I use Haitian zouk. I make selections. Modifications.

So when you compose, you’re combining various genres –

No, not at all. I’m not combining; I’m modifying. For example, I might take a melody from Haitian zouk and then turn that into a completely traditional Nigerien song. I can do the same with techno and hip-hop, by changing the speeds of things.

All that on the piano?

Did you come from a musical family?

No, I’m the only musician in my family. My little brother started making music when I did. He’s since stopped, but I continued.

Why did he stop?

It’s okay. It happens. One day, you might call asking for Hama and someone will say, “Hama’s dead.” It’s just like that. That’s life. My mother has died, my little brother died, my father has died. So now it’s just me and my two little sisters, who I live with here in Niamey.

Have you found a lot of support in Niamey?

My music is popular here, yes.

You said before that the music has changed over time –

Yes, the music is different, very different from Torodi, but I’m still using the same piano. Since I don’t have the piano in front of me, I can’t really show you the difference. I can’t play the piano with my mouth. I’m actually working on an album right now, but people have been making good music for a long time, for years, and hoping that it will change something. But we don’t know what will happen in life, what fate is reserved for each person.