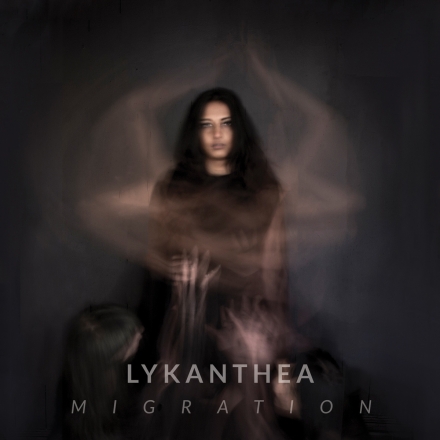 In her video for "Parturition" ambient artist Lykanthea walks slowly from an ancient Etruscan burial ground before settling in the sea. The mythic, almost otherworldy video is fitting: The Rome-based Chicagoan, whose real name is Lakshmi Ramgopal, wrote much of the EP Migration while studying ancient ruins on the remote Greek island of Delos.

Last week I spoke with Lykanthea over email about her time spent on Delos, the Sumerian mythology that inspired her EP, and the difficulties of pursuing a music career and a PhD at the same time. Check out the video for "Parturtion" below, and read my interview with Lykanthea after the jump.

To start things off, I’d be interested in learning a little more about how Migration came together in Delos. Was there some point in your time there when you decided to record the EP, or was it something you had been thinking about beforehand?

When I went to Delos, I was in the early stages of researching my dissertation and needed to visit the island to study and photograph some of its archaeological ruins. I had decided even before I left the States that I wanted to start writing my record while I was traveling, so I brought a tiny Akai midi controller with me to Greece. I would get up at 3am in the morning, thanks to jetlag, and fiddle with the controller while I sang into my laptop until the sun came up.

How much of the EP would you say was recorded on Delos? How much of it was put together when you got back to Chicago?

The record was written and recorded all over the place - on Delos, in Athens, in Chicago. "Telos," which I wrote almost in its entirety on Delos, remained the least changed throughout the writing, recording and mixing process. I spent a lot more time agonizing over "Aphonia" and "Hand and Eye," since I spent months rearranging and rerecording them in Chicago. In the end, everything came together at different times and places. For instance, I didn't touch many of the low-fi vocal takes I recorded with my laptop mic for the demo of "Telos," since they included quirky little ambient sounds that the mic picked up from the chair I was sitting in while recording. But I replaced the original vocal parts in other songs with studio retakes in Chicago. That's also where I added guitar and live drums.

How did the experience of being in such an isolated place influence the songwriting? Did it push the record in a direction that your music may not have been going in before?

I'm sure it did. I didn't consciously set out to write a dreamy, inward looking album, especially since my old band wrote electronic dancepop. Initiating my first solo record while living alone on this rocky, raw, mostly uninhabited island put me in a mindset that helped me go deeply inward in a way I hadn't experienced in songwriting before. That mindset stayed with me for a long time after I left. I think it's what made the album's world feel so complete in the end, at least to me. And maybe even a little solipsistic. I'm speaking to myself in it because I'm alone.

In addition to being almost uninhabited, Delos is pretty famous is Greek mythology as the birthplace of Artemis and Apollo - I was also curious as to what kind of influence mythology might have had on the record.

The Sumerian story of the goddess Inanna is the original inspiration for a lot of the ideas contained in Migration. Inanna is described as a terrifying force of creation and destruction who voluntarily makes her way to the underworld and is then involuntarily held there against her will. The process of entering and finally leaving the underworld changes her, since it forces her to confront her weaknesses, her dark sides. I was immediately drawn to the Sumerian myths that frame these ideas of birth and death, of claiming yourself despite yourself. I wanted to build on their narrative structures and symbolic language to make myths of my own.

Is an interest in mythology what lead you to graduate work in Classics?

Actually, no. I've never been that interested in Greek and Roman gods. I headed to a grad program in Classics because I'm a historian at heart. I want to know what people did and why, I want to know how they come to understand themselves. Mythology definitely plays a part in self understanding. But for me, it's the people, not the gods, who pull me in.

There have been a couple of other artists who have balanced very interesting recording projects with academic commitments. Do you think there’s anything about the academic lifestyle that contributes – positively or negatively – to your work as a recording artist?

I'd say there's plenty of good and bad. Being a grad student has given me lots of freedom to decide when and where I do my work. I've been able to spend a lot of time on writing music and touring in addition to being a researcher and teacher. It's amazing to be able to do that. Plus, my academic field allows me to travel, and that travel changes me and gives my music a lot of texture.

But it's also hard being an academic and a musician. Plenty of academics think that peers who use their time for serious, non-academic work are unserious about their academic work. I've received comments about this throughout graduate school. That's really hard, to feel like you can't be yourself in a community you're part of, to feel like you have to hide an essential part of yourself.

Do you have a community of artists – removed from the graduate community that you’re a part of -  that you work with frequently?

I do! Musicians and designers and artists, many in Chicago and the rest scattered around the world. I know a lot of them through social media networks, and those relationships have yielded a lot of amazing collaborations, like the capsule collection with Hvnter Gvtherer and the video with Krist Mort. These relationships have been so creatively nourishing. They've pushed me to keep raising my standards and also defy any instinct to fit into any particular genre, musical or otherwise. It's important to work with other people, otherwise you get stuck in your head and develop an ossified way of thinking about things.

Speaking of your work with Krist Mort: the video for “Parturition” was shot in an Etruscan burial site at Orvieto – how did the two of you decide on that particular location?

I've been drawn to the textures and gloomy interiors of Etruscan tombs since I first visited them in college. They have a weird, alien quality, maybe because they're architecturally less familiar to people than, say, Roman ruins. They immediately came to mind when Kristina and I decided to shoot the video. Since Migration deals partly with the idea that we emerge from phases in life as new people, I wanted to shoot at a necropolis, which literally means "city of the dead." Our original plan to apply for a permit to shoot at a site at a town called Cerveteri. The permit was rejected by the division of the Italian archaeological commission that runs that site, probably because the video has nothing to do with Etruscan archaeology. So then we applied to shoot at Orvieto. Amazingly, the request went through.

You just played a spate of shows around Europe – what kinds of recording software and audio devices are part of your live repertoire?

My live shows are mostly improvised versions of songs from my album. I do a lot of singing, which I loop heavily and run through a mix of EHX and other pedals. I also play synth parts with a midi controller hooked up to my laptop, use backing tracks and play a guitar with a cello bow. In the past I've performed with choruses, clarinetists and violinists onstage, and I'm hoping to make that a more permanent thing. Having more people onstage makes the music bigger, more texture, more energized.