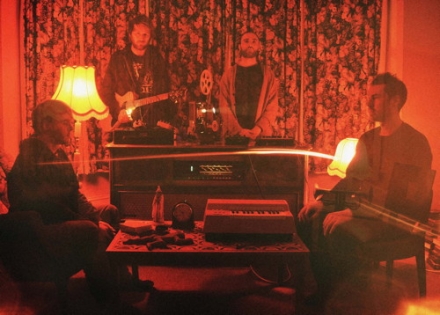 Now that they have produced a string of EPs and their first full-length, Compendium, it seems fitting to inquire a bit further into the arcane world of Old Apparatus. As a collective, they have worked hard to remove any traces of human presence, replacing it with striking imagery and rare media appearances constituting the stage for their manifesto. Their earlier images consisted of old Victorian portraits or mug-shots, the human heads removed and replaced by old and grotesque science equipment. It was during this time that OA released a self-titled 12” on the legendary dubstep producer Mala’s label, Deep Medi. It was a mesmeric debut, incorporating noise, industrial, and dubstep with a plethora of sounds and instruments. It created a big stir in the UK scene and was a perfect introduction to the limitless sounds of Old Apparatus.

After a second release on Deep Medi and a handful of remixes, including one for the Shangaan Electro album on Honest Jons, the group found a new home for their esoteric material in the formation of their own label, Sullen Tone. This move resulted in a highly fertile period for the group, with the release of a series of genre-hopping EPs in 2012-- each with its own, striking, occultish cover image. The first EP from the new label was attributed to the group, but the three that would follow were produced individually by the band members LTO, A Levitas, and Harem. It is the music from these four EPs that leads us to Compendium. (co-premiere with Ad Hoc)

Compendium is out now via Sullen Tone.

Compendium is compiled from four previous OA releases. Was the intention to always release these tracks as an album?

They were originally written as individual tunes in their own right, but we always had the intention to combine tracks from the different producers into an album format at some point. We felt initially it made sense to present each producer's sound as a separate entity before weaving them together into a unified sonic world. Every possible combination of tracks was considered until we found the best balance between progression and contrast.

There is a variety of musical occurrences and influences to be heard on Compendium. How do you explain the coherence of your music and how it all fits perfectly under the large OA umbrella?

When you're part of an artistic collective, you always have some level of awareness of that when you're writing, and naturally shared characteristics develop. Continuously sharing music and art that inspires us helps this process.

Old Apparatus has a very strong image, from your artwork and your anonymity to your language and general music release structure. Would you say that it is a considered approach, or a natural approach?

We've always carefully considered every aspect of what we do. The visual element was always intended to be as important as the auditory. And everything else has naturally followed that.

OA’s music has a real resonance with its listeners. The music seems permanent and personal while also following this strong narrative between the music and your aesthetic. Due to this approach, it seems like a reaction to the current consumption of music, how it is lost as quickly as it is found. Is this something you have tried to counter or something you are wary of?

Yes we're very aware of this over-saturation and generic-ness in modern music consumption. We're happy to spend a meaningful amount of time considering every aspect of everything we do if it means it will stay in people's hearts and minds, rather than putting out throw-away sound-alikes that will be forgotten tomorrow.

Finally, can you tell us a bit about the mix you have done for us?

The four of us come from pretty different creative backgrounds so although collectively we share many of the same ideas, individually we draw inspiration from a variety of sources. I think the mix reflects this. The Jacaszek track in particular is a favourite. Also, "The End of the World" by Aphrodite's Child. The album it’s from, 666, is really crazy.