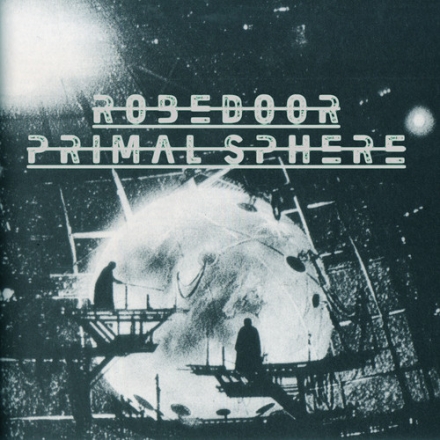 In general when records are released, they communicate with the audience as a product of a present moment or trend. There is a context and we can understand it, like or dislike it, as a result of this. This does not always equate to the mundane, as a lot of the best music/art responds to this in a unique and individual way. These become records that stand out and ultimately can reset the trend. There are also records that respond to the future, or more generally, evoke a sensation of contemplation towards it. They will have defined origins and be apart of genre, but it is the listeners reaction to the music, that defies its futuristic tendencies. Robedoor’s new release Primal Sphere, out next week on Hands In The Dark, is exactly that type of release. It is a record that is heavily rooted in the LA drone and noise scene, but has such an austere attitude that it creates a frisson of the future. To untrained ears it could come across as a harsh constellation of noise, but if you can break through the initial discourteous layer of niceties then there is plenty of cogitation to be experienced. Primal Sphere responds to the future in a stoic and regressive manner as the album is underscored by the ideas of primitivism. But it is also a hugely enlightening listen as one can become enchanted by its raw power and its augury.

Below, you may exclusively stream the entire LP. That aside, read an interview with the two members of Robedoor, Alex Brown and his non-related friend Britt Brown, co-founder of Not Not Fun Records.

Primal Sphere is out on Hands In The Dark on May 14. Order it now over here.

When you guys began it was just the two of you, with occasional M Geddes Gengras collaborations – which lead to him becoming a full member of the group. But listening to the new record it seems you have returned to the original lineup as the embryonic drumming from Geddes has been replaced with a synthetic electronic one.

Britt Brown: Well me and Alex started the band in 2005 and for the first four years it was just us, with the exception of an occasional friend overdubbing a riff or drum frenzy on a particular track, and a handful of collab live sets (with Haunted Castle, Pocahaunted, Changeling…). It wasn't until 2008 that Ged offered to help us do some recordings, and it wasn't until halfway through working on Raiders that he evolved into actually playing on some songs. It felt right, so he mutated into a third member of the band for the next few years. After Too Down To Die we'd sorted of burned through this one particular set-up we'd been exploring and wanted to spelunk elsewhere, so we morphed back into a duo and ditched some older aspects of our rig. I could imagine shit changing again in the future though, it's hard to say. A band's an organism, it keeps oozing.

Alex Brown:  We’ve always been open to and interested in collaboration and our time teamed with Ged lasted longer and felt more successful than it has with anyone else who's played with us. Robedoor’s always been this no-mind, barely-sentient blob – and Primal Sphere is kind of like a conciliation of all that murk lair mentality.  We tried to be as non-physical and devoid as possible when recording this LP.

How does the song writing process differ when Robedoor is just a duo?

B: I think one of the reasons the band's endured so long is that we've always gravitated towards these complementary roles: Alex is the blood – low-end sludge and bass – while I more write the skeleton of the song: a riff, a loop, drum programming, etc. When Ged joined the band the process stayed the same. Alex and I would still usually carve out the core and then the three of us would jam through the sketch together to try out different arcs and structures. Ged can play basically any instrument, so his role was helping flesh out our caveman patterns into something a little more overtly musical. It was a good dynamic.

A: Yeah those years were about plodding towards some new zone of actual songwriting. Unlike us, Ged’s a musician – he’s a wizard and conceives of music on a more professional plane. The trio dynamic helped us evolve from our loud/louder/deafening style into some cool spaces that kept the music challenging. Now we’re sort of bending back towards certain older oblivion vibes, but holding on to certain structural tropes like definitive beats and songs that aren’t one hundred percent improvised.

The first track "Stagnant Venom" is a very grandiose opening – powerful and cinematic, the last minute is particularly explosive. Listening back to your previous work, I feel you have a penchant for these types of sounds. Is this something that you aim to create or is it more of a reaction to your sound?

A: "Venom" is good evidence of the cult sandwich we’ve been working towards for years – it's groovy in this weird way, but also totally numbed out, and mostly a meditation. Monoliths gotta crumble though.

And where does this desire and inspiration come from?

B: Vibe and volume are usually the only aspects of each song we consciously decide in advance. Cryptic phrases, books, drugs, experiences, etc. all trigger concepts or moods that we talk over and try and conjure. There's definitely this dungeon OM we're always questing after in some form or another.

And how does "Stagnant Venom" fit in, in the context of the record – it feels like the track sets the tone for the LP, once you listen, everything feels like some utilitarian statement – some wider social context.

A:  "SV" is totally Utilitarian! 'The greatest ill for the most horrid ilk.' It's like pragmatism for paint-huffers. One vibe/vision we’ve always sought after is making tracks that sound like what demon gangsters would blast as they roll through your neighborhood at 3 AM smoking sherm. "Venom" is the formaldehyde joint you smoke to see the rest of the record.

Throughout this record it feels like a reaction to industrialisation, not in just a negative sense, although some of the more demonic tones could easily be interpreted otherwise. But in particular "Concrete Brother" – it is not just the name, there are plenty of mechanical tones and the album has a feeling of urban isolation. Is this a theme you wanted to explore?

B: I'd say so. We've always bonded over being such an un-LA LA band – there's so many sunny facades hatched and hawked to you by California culture vampires but of course the truth is it's like any other fucking city, with just as much meaninglessness and isolation and violence and sleaze and negative status-mongering. Robedoor is more about alchemical escape, the world grinding above you while you stumble through some subterranean reality below. Urban isolation is an ongoing interest.

A: Yeah we’re surely products of our city, and cities in general, but the space the music exists in is much more projected as Britt said.

Other than Industrialisation – a type of primitivism seems a theme explored, even through all the heavy electronics?

B: Primitivism is the only path we know. It's also the type of music we like: physicality, volume, weight, savagery, confusion. Using semi-complex machines to achieve this end felt fresher to us than banging on big war drums.

I am particularly fascinated by the ending of "Blasted Orb" – church bells waft in over the noise before the track dissipates into a Gregorian chant sample – it's quite a surprise when you hear it, and makes me slightly reconsider/approach the record, namely the detail and delicacies. Is it just a red herring or is there a wider context to that placement?

A: Yeah that death-monk-chant rules. We tend to not go crazy layering a billion overdubs because when the sounds are so thick, adding to the cloud can be very difficult. Anything that doesn’t take place in the initial recording ritual always stands out – it's never as fucked up sounding as we want it to be. But, taking a cue from more on the nose industrial progenitors, we’ve been playing around with direct samples.

B: In the early days of the band we used to incorporate samples into some of our shows and recordings – usually slowed-down meditation tapes or fogged-out thunderstorm field recordings through garbage pedals. Recently we'd been having some ideas on ways to return samples to our set-up, and "Orb" was the track we experimented most with, though there's some graveyard atmospherics on "Concete" too. We want the songs to be weird tapestries of poison, seeping deeper insider your mind, and those haunted bells tolling meshed with the death resin of Alex's riff in a way we really liked.

You are quite a prolific group, where does Primal Sphere fit with the back catalogue of Robedoor and how do you decide to release a new record? Is it premeditated or more natural?

B: People always say that, but we haven't been prolific since like 2007. When we started we ascribed to the fairly common noise-culture attitude of recording basically every practice session. We'd end up ditching the bulk of it but when you record four hours a week, 52 weeks of the year, the tapes really pile up, and for a while there was a deep spectrum of bedroom labels looking for C30's of stormy catacomb hazes; hence all the releases. But the longer we've done the band the slower we move, the longer we like to soak in each idea before committing it to the 4-track. That said, there's never been a day of the band where we weren't envisioning or peripherally mapping out some future album (or two). The process is half planned, half Ouija board. Our songs ooze differently every time so it's tricky to pick the right moment to record them – right away, or after months of jamming variations, it depends.

A: I’d say our pace is verging on the glacial at this point. But in terms of production of sound now it's a given part of our process. When the sounds start sounding like songs, we consider how to recreate them and how to distill them to something that deserves to last. Most of our early recordings were improvisational, which to an extent is still the case…maybe it's better to say that we’ve sharpened the ritual of Robedoor. When we didn’t have eight years of working together we had to rely on being experiential whenever we recorded – getting lost in some forced Satanic Void on a Wednesday night so we could keep up with release requests. These days practice is a Practice – it's like YogaTherapyChurch, but with weed and booze.

B: The live show agenda is similar: in the pitch black with a single candle, surrounded by speakers, letting the songs rise and burn however suits the mood of the night. It's rare to have a venue let you dominate the space like that though. Sometimes it's disappointingly normal – on some stage with lights and bored people drinking beer. We deliberately took a break from shows for a year, but we're gonna tour Europe this October for the first time. I have a good feeling about it.

A:  Well we never get booked in fully appropriate spaces (bone churches, caves) so we force ourselves into the gloom mentally. The goal is always to occupy all the air in the room with the drone – if whoever is watching is willing to just get stoned or send themselves to an altered state in their mind the effect is infectious. Europe should rule. Catacombs abound right?