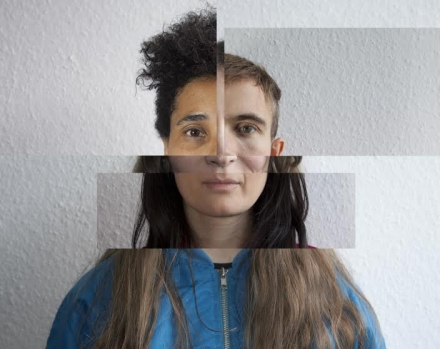 Paula Temple's Noise Manifesto label does indeed comprise a manifesto: it summons consideration of a mentality wherein human interactions are seen as noises shooting around in synthesizers, non-phallically processed and mixed to create an altogether original product. The label, then, is a resource for cultivating new or distorted forms of remix, album, collaboration, release, and series, an altering practice which is certainly meant to be applied to other areas of society and life.

"Decon/Recon," as in "deconstruction/reconstruction," is a brand new series that offers fodder for producing dance music differently as well as an offhanded guessing game of who wrote what part. The EP is a symbiotic display of styles by Berlin-based artists Oni Ayhun, rRoxymore, Jaguar Woman (Paula Temple), and Aquarian Jugs (Jam Rostron aka Planningtorock). The tracks are not created by one person and then passed on; they are each made of different parts and samples produced freshly for the occasion by the four artists, passed around, like a fragmented techno band playing hacky sack in different buildings. Thus, "Decon/Recon" is a statement, a co-operation, and a much needed return to the puzzled heart of techno, all under a playful and nearly improvisational feel.

"DR1-1" dribbles breakbeats and clamors saxophones like that of Planningtorock's distinctive style. Meanwhile, the claps pick up protestingly, as if Oni Ayhun has been asked to play digital glass bottles for The Knife. "DR1-2" nurtures a rainy day, cardboard box atmosphere that might be otherwise seen in rRoxymore productions before slipping into a chimey dischord and metallic hit on the 3-count, which is reminiscent of Temple's idiosyncractic language of percussion. Again on "DR1-3" we are confronted by pieces of what seems like PTR's arsrenate orchestra and more beats that could have come from Temple. "DR1-4" is at first a samba, housey track that yields to a break down of linear drive and spirals downward, or upward, perhaps sideways, whose melody could possibly be attributed to Oni Ayhun... but who knows.

Overall, "Decon/Recon" is a tasty collaboration. You can hear the concept behind the music; you don't necessarily need the words which also eloquently state the purpose of the project, provided that you listen properly. It is musically as well as aesthetically progressive, with a certain type of beauty floating around somewhere nearby. It enables us to travel through neighborly uncharted territories, with smiles one our faces. We can hear the individual talent merging together softly and perceive of the succinct and prideful execution of this task of returning fragments into a whole. Furthermore, we can hear the friendship among these musicians, the community they provide for each other, and that type of message combined with the circularization of such politically motivated music is rather complementary to recent debate and dispute about the state of gender in electronic music, not to mention everywhere else in the world.