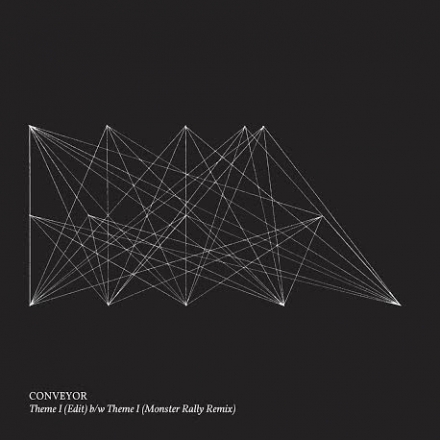 This is a bit confusing: Brooklyn’s Conveyor are releasing a double-LP, Prime, of their score for the 1971 George Lucas film THX 1138. Prime was composed and performed last December alongside two midnight screenings of THX 1138 at Brooklyn’s Nitehawk Cinema. The first track, "Theme I", has been remixed by LA's Monster Rally.

“Theme I” introduces listeners (and watchers) to the operatic scope typically associated with Lucas, as well as hinting at the film’s surprisingly intimacy. Indeed, THX 1138 steps, sometimes in an off-putting way, back and forth between being a grand, dispassionate epic and a more nuanced study of individuality and personhood. Monster Rally condenses Conveyor’s locomotive wash of guitar and synthesizer into something even more immediate and palpable. Snapped to a danceable drum loop, “Theme I” goes from anguished and distal to sharp, focused, even (delightfully) insensitive.

But both Conveyor’s original (which might be seen as a spiritual remix of sorts) and Monster Rally’s remix are steeped in the moody atmospherics of a mid-century version of the future. The faded horn sounds and marching drumbeat lock Conveyor’s piece decidedly to 1971, and Monster Rally’s version seeks to tear this apart in an almost classically dystopian fashion, seeming to disintegrate and recombine with every percussive flourish.

Have you ever wondered what was on Frank Poole’s iPod as he ran laps around the Discovery One? This'd be my best guess.

Conveyor’s Prime is out July 15 on Gold Robot Records.