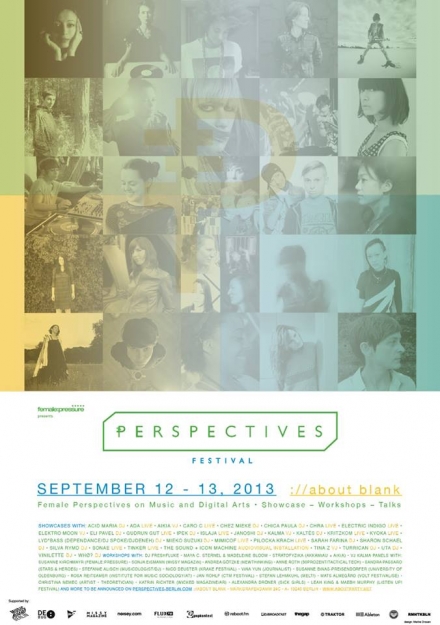 A couple of weeks ago, I had a nightmare about going to a Berghain where there were only women. No male bar staff, no discriminative bouncers, no male DJs, and only women dancing out on the floor. I woke up laughing about my backwards anxiety toward a female utopian take-over of Berghain.

While in reality Berghain is predominantly a male realm – no different than the unarguably large percentage of all techno related scenes – serving as a beacon for the music world that, according to Wolfgang Voigt, still just doesn't have as many female artists as male ones, it is nonetheless unlikely to not see female artists listed frequently. An all male line-up, staff, and, for sure, a gender-utilitarian crowd, will never be encountered any given weekend inside Berghain. That said, it appears that the club has become more inclined to put female artists behind the decks (but not the sound board?), and we may be surpsied to go for more than two weeks without seeing another female headliner. Yet, the male-female ratio is meager enough to imply some kind of bashful, easying-into the fact that women have a groundbreaking grip on contemporary electronica. The current times are indeed historical moments and it is becoming difficult to deny. But, as for Berghain, either there is no revolution being taken out on it, or they are hiding the war evidence very well.

The Perspectives Festival, launching next week in Berlin, will aesthetically and calmly rumble the disproportionate gender profile of techno/electronica. Proudly and poignantly stating that, as there are stunning numbers of female producers on the global scale, the Berlin club scene simply does not take them seriously. The festival attacks the polemical trap by inviting some artists who have frustrations getting gigs because they're too inexperienced; yet their ability to gain experience is interrupted by the fact that they cannot get gigs. These artists happen to be female. Occurrences such as this most of all point to a pattern of neglect, disinterest, greed.

With a strong line-up including Gudrun Gut, Sarah Farina, Electric Indigo, Chra, Acid Maria, plus more, we are sure to acquire a rich musical experience governed only by seasoned and dedicated female musicians. Unfortunately, such an experience is overshadowed by its very mission in politely yet confidently rebelling against “mainstream,” taciturn, male-dominated events. We have to ask: how effective is reverse psychology in the case of gender discrimination in electronic music? Does a resistance such as this greater divide the gap? Does on-sight resistance created by diversity serve as a consistent detriment? Does femininity as opposed to feminism have an aural influence on music?

Perspectives will be September 12th and 13th. Be sure and catch the showcases as well as lectures at about:blank.