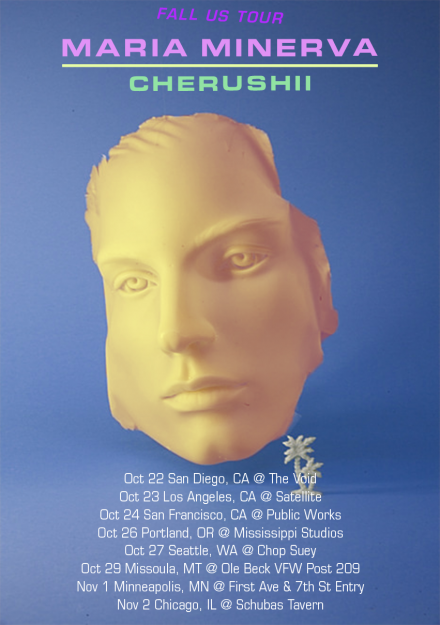 On their US mini-tour this autumn, Maria Minerva, with glittery techno act Cherushii, stopped in Missoula, Montana to play our town's best alternative music venue, the Ole Beck VFW Post #209, a couple days short of Halloween.

The Veterans of Foreign Wars, or VFW, is a national club that plants community centers throughout the U.S, aimed for veterans but open to the public. They are specified by their post number coordinates. Los Angeles's has several including #9793, Chicago a few like #2024 and #1284, Seattle #9430 and #2289 Rainier Post, and Missoula's Ole Beck #209. Typically, any VFW post will be hosting country music bands and two-step dancing, cover bands, or Bingo. Rarely, especially out west, does a VFW see or hear the likes of Detroit techno or experimental pop.

Maria Minerva, a Not Not Fun all-star, whose amount of released work is not short of prolific, is a spectable before any audience: packed or hollow, fashionable or earth toned. Maria's post-grad disco, inticing videography, and striking stage presence are in many ways intellectually detached from and ahead of sober performance reception and music listening. With a warm up act like Cherushii, aka Chelsea Faith, a San Francisco producer who just released her Queen of Cups EP on 100% Silk, we are looking at a pair of powerful, professional, and unique figures from a new wave of techno and dance musicianship: the exciting female takeover, of sorts.

Missoula, Montana, however, is not a component of techno. It is not generally heard of, sees little of the global dance scene, and inconveniently bares a shortage of bank chains such as CitiBank and Chase Bank, to which Maria and Chelsea needed to pay visits, respectively. No, Sir. Missoula is a twee, country and folk, indie rock city, with fleeting movements of hip-hop and reggae. People here are generally open-minded to electronic music, at that, any music; however, electronica is, like so many other places in the States, peripheral and not a priority. This was exemplified by Maria and Chelsea's local opening support from Modality, an all-male psychedelic math-rock outfit who attracted most of the crowd, and left with most of the crowd. Modality served as something outstanding for the mini-tour, since most of the other local support in Portland and Seattle was from bedroom-synth girl bands, Chelsea told me.

How, you might wonder, does Missoula get acts such as Maria Minerva booked at a place like the VFW?

As of about four years ago, the so-called “saturated” music scene in Missoula wound up making Post #209 on W. Main Street a main hub. Shawna Lee and Tom Helgerson (of SHAHS) are widely responsible for this collaboration, and have seen a lot of success as well as frequent bookings. "The VFW crowd loves music. Our regulars are very loyal to the music seen. They buy merch and drinks for the bands and often times offer a place to crash," Shawna wrote me. Both ends of the spectrum, the veterans and the musicians, usually leave after a show with a sense of coalescence and a lot of Pabst Blue RIbbon in their gut. 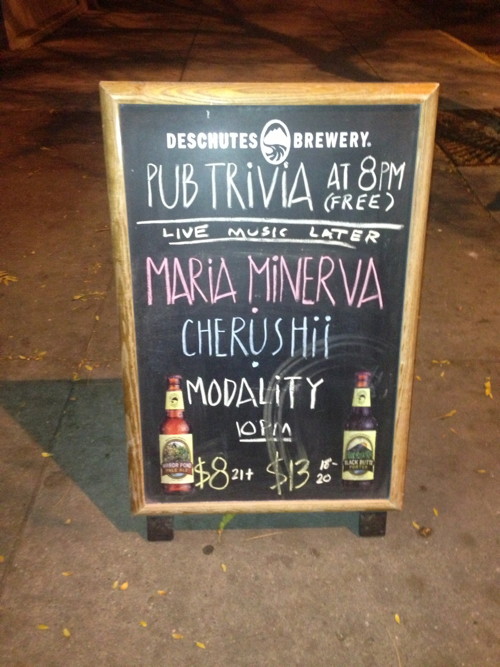 In order to get a feel for the VFW community, Shawna gave me a couple of issues of the VFW magazine, throughout which I encountered several ads for slip-free shower systems, compensation lawsuits, and hearing aids, such as TV Ears, an eco-friendly auditory enhancement device for those who have suffered some hearing loss. With TV Ears, you can listen to the television broadcasts better, without blowing your spouse away with volume.

Shawna says that Post #209 is trying to get younger veterans to come in more often as a lot of the regulars, World War II veterans, are sadly becoming too frail to go out and hit up the bar. A community magazine catering to the generation that not only saw Europe in apocalyptic confusion but also fueled the home electronic appliances of convenience-boom echoes what Lynn Spiegel called bringing your training home with you; that is, surrounding oneself with instruments that remind a veteran of the gear they were trained to use for surveillance and protection at the war front (Make Room for TV: Television and the Family Ideal in Postwar America, 1992). In the American household in 1952, the stereo, television, and ice machine were of the man's domain. The women, on the other hand, had their cooking appliances, mixers, can openers, electric knives. Mix these realms together and we get a materialistic veil among or on top of a place of unrest and inability to share and cope with parts of fighting in a war, or waiting for your betrothed to return home the same young man.

For Klaus Theweleit, the Freikorps men of World War I were especially encouraged to leave women behind and embrace male companionship and militaristic machinery in order to correctly display devotion to the fatherland. Theweleit famously makes several cases where men, preoccupied with surviving the war and gaining the unswerving promise from their sweatheart, later in life and happily married to the same woman, hesitate with enumerating their spouses' attributes, behaviors during the separation, even their names: "Denial of women is only natural, and therefore worthy .... The men one meets [on the front] don't need women" (Male Fantasies, Vol. 1, 1987, pp. 33-35).

Something Theweleit neglects to establish is that, specifically for the German Freikorps of WWI, women are indeed necessary because they fulfill the role of the damsel who needs to be left behind, a part of the process of surrendering romantic love for male companionship and effeciency with machinery.

There is absolutely no accusation that the members of VFW #209 or any post were in such marital situations, nor attached to mechanical gear reminiscent of what they used in their branch of the military. With all due respect, this an observation that, traditionally, machines belong to the man of the house, and this is a plausible reason.

Maria Minerva is known for her singing and sampling, using a "basic" but impressive array of equipment. Cherushii's setup is double the size of Maria's, with a fascinating assortment of drum machines and glowing mixers – and, no, not the handheld mixer for making batter. These girls, as are many women prevalent in the global techno scene of the moment, are very much in charge of their gear, and their gear is devoted to them. Maria's voice and relentless looping samples are a bit like can openers for the preserved mind that predicts certain things from women's music, and Cherushii's beats are a little like electric knives, the handles of which glow warm milky neon colors. In this case, instead of consuming some kind of entree, we are consumed by dance.

The show had an embarrassingly slim audience, perhaps because it started so late on a Tuesday night. While Modailty took some extra time to set up and sound check, Cherushii and Maria promptly played after the local opener, keeping the motivation and rhythm going. Nobody there apart from a few of us was accustomed to live electronica or the girls' recorded work. Still, they owned it. Cherushii went for a "quieter set," which was very auspicious and focused, and Maria chanted and swayed the way we've seen her impressively do so before at Berghain Kantine, Unsound, Chez Jackie, and more, all under the turned-off electric Bingo sign.

At the end of the night, as Maria and I were sitting at the bar talking, a young guy started asking Maria about her equipment. He was nice, genuinely inquisitive, and meant no harm; nonetheless, in my mind, his inquiry naively furthered the problematic tradition of machines belonging to men, not to mention the paradox of professional female techno musicians playing at the VFW. He said he had some of the same gear, asked her whether she tried some of the newer versions, before we said we had to get going. He didn't say anything about the music or performers. He just wanted to assert something about the gear she uses that he recognized.

Such a showcase not only sifts out issues like gender in music, but also conveys the beauty and usefulness of contrast. Maria Minerva at the VFW in Montana hits several different layers of cultural criticism. In the recap I did on Seattle's Decibel Festival, I asked whether the problem of disproportionate male-female ratio in electronica, and all of the music industry, stems from a subconscious cultural enjoyment of continuing to see boys operate toys. Maria and Chelsea's gig at the VFW coincidentally helps address or at least undermine the tradition and tabooed history, as well as America's militaristic personality. Altogether, it can perhaps now be seen that, in search of an efficient way of readdressing the issue of gender in techno, concurring with women's dominance over their gear is a healthy step. Daphne Oram and Delia Derbyshire were uninterrupted masters (mistresses?) of their machines, straight through the decades of television and rock-n-roll, in the 1950s, 60s, and 70s.

If guitars are the rock-n-roll toys for boys, shouldn't the Oramics machine, the Wobbulator, and various mixers be the girls'? Should we focus more on women's historical relationship with technology, and highlight their massive non-lyrical contribution to electronica, or treat it as undiffereniated? Or does this further the gap? Should we listen for feminine qualities in music produced by women and celebrate them, or should we consider the sensitive and outworn context of who better knows how to operate and maintain machines? While some say that gender in techno boils down to the beats, bass, and the emulation of violence, it seems that, on the visual level, it quite accessibly resides at the sound board.

Maria Minerva is expected to release a new album on Not Not Fun in 2014. Cherushii's Queen of Cups EP is out now on 100% Silk.