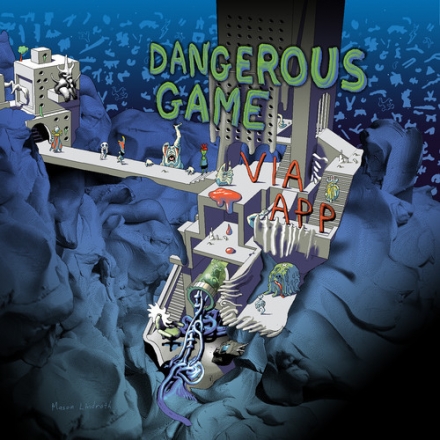 I was telling Henning the other night that I love sloppy, hypnagogic, noisy dance music. I like how it's sort of funny, and carries some anarchic syncopation while conveying both slimy and metallic quality. Controversially, I think it's the only actual new thing to have happened in electronic music in the last ten years, apart from slow disco and stretch. Learning that Via App is an exceedingly young American producer (20-year-old Boston-based Dylan Scheer), turns my entire perception of this track over: where did she get such a succinct understanding of techno song structure? "I Came To Win" starts quite bare, then explodes with some chopped and pitch-bent vocal sample, braided tightly around the beat. Then the 1970s sounding guitar sample corrals the beat into an adjusted assortment before the entire track strobes into your ears. It transforms into absolute magnetic, telekinetic chaos. I get so excited by this track, I can only think of what context to apply it to to pipe back down. For me, this song would be best played either as the last track before turning the wheels over to the second DJ, leaving him or her with a tumbleweed to work out from (be sure and wink so they know you're fooling around), ONLY if the crowd is hyped enough from sugary cocktails and the venue caters to this type of experimentation with nightlife rituals; or first thing during the morning of an important day, like your wedding or something, over a blood mary.