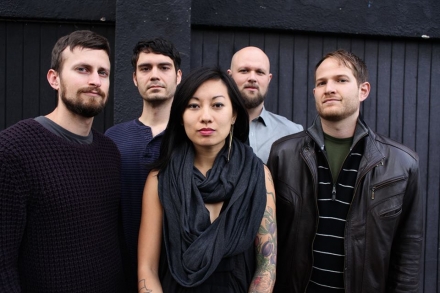 Swahili are a Portland based five-piece whose debut LP was by and large a fusion of industrial drone and distorted, naturalistic beats. Inspired by the paranoid futurism of Philip K. Dick's Valis, Swahili are now shifting more towards the bright, synthetic pummeling associated with Vangelis and the silver age of science fiction soundtracks that he helped kick off. The results have been something akin to a nerve-damaged Tom Tom Club: exquisite, funk-inflicted pop music fused onto boundless, synthesized landscapes.

“Vestal” is a single from Swahili’s upcoming album Amovreux, and the track proves that the group has the energy to show off discotheque charisma over the course of an unflagging, six minute rhythmic loop. Frontwoman Van Pham's voice has the force to keep up with the throbbing rhythm behind it, while remaining maneuverable enough to evoke an almost elegiac sense of spirited wonder.

In her video for "Vestal", Portland-based artist Vivian Hua has mapped Swahili’s rhythmic psych-pop to a swirl of psychedelic imagery, comparable to early videos produced for the Pink Floyd, and mildly evocative of the drugged-out paranoia associated with Dick's novel.