After the staff's favourite tracks of 2012 on Thursday, the editors' picks on Friday, and some of our most cherished videos of past year in our special edition of Video Sunday yesterday, we start the week with the royal category of lists, the best, most relevant, most awesome albums of that certain, arbitrarily defined period of time that we're now looking back at in order to over-analyse and classify, even if it's really been gone for two weeks only, and nothing's changed since then. Fresh starts and new beginnings last until you grab your next cigarette, so to speak. But let us not ponder on the wrong things. Musically, 2012 might not have been the most consisting or exciting year in pop music history, not a year to redefine or to unsettle any foundations. Still, it has been a good year for albums, with quite a few truly outstanding contributions that surely will last. Our writers have voted and justifiiably decided that Laurel Halo's Quarantine should be declared this site's album of the year, closely followed by Julia Holter's enchanting chamber pop on Ekstasis, and Andy Stott's sparse and desolate techno masterpiece Luxury Problems. We find no reason to object. However, as we believe that you have been more surprised by a list before (though there are some not so obvious ones on there), we asked our contributors to submit a brief piece about an album or EP that they and we believe did not receive the amount of attention it would have deserved. Yes indeed, though some of below names will sound very familiar to you, we do think that all of those in some way fall into the 'overlooked' category – be it by us, or by others.

Check out some of last year's most interesting pieces below, followed by NFOP's 'official' top 20 albums of 2012.

You'll Never Get To Heaven - s/t

The most beautiful Canadian album of the year was an unexpected ambient pop gem from a new duo, London, Ontario's You'll Never Get to Heaven, composed of producer Chuck Blazevic and singer Alice Hansen. Bands spend their whole careers trying to perfect this sort of meticulously layered shoegaze, but these two arrive fully-formed on their self-titled debut. The album's source samples are mostly drawn from early 20th century classical music and 1970s dub, and the combination produces a dense texture for Hansen's vocals to float through. It's an insulating record, one that feels falsely protective in its haze, and sounds like classic My Bloody Valentine's warmest, most comforting moments. Despite having a very consistent sound, each of the songs are distinct and work as stand-alone pieces, including the impeccably crafted instrumental "Reliable Effects." From the beginning Philip Glass scales to the closing Julee Cruise-evoking anthem "It's All Over", You'll Never Get to Heaven tug at the heartstrings and make you never want to leave your room.

Tri Angle's latest signee, Seb Gainsborough who records as Vessel, made one of our favourite dark electronic albums of 2012. On Order of Noise, Gainsborough fuses together dub-driven techno beats with smooth, ethereal vocal samples, and the result is an innovative electronic journey. Where other artists in the genre choose to go the obvious way, Gainsborough instead brings in distorted samples and low-pitched drums. Often, bass-heavy synths are used in place of actual drum hits. Where he excels is in subtle builds, as in "Stilten"; to some, this may come across as unnecessary repetition, but that's where his expertise with techno beats comes in. Gainsborough realizes, too, that in repetition comes tension, and uneasiness is an underlying feeling in every track on the album - one of the most important factors in his music. Overall, Order of Noise is a challenging album that's sometimes beautiful, sometimes harsh, but always haunting.

Over 2012 Lindsay Tuc has inspired many tired ears in Australia and abroad with his fresh and exciting brand of house music. Each of his 'EPs' are made from tracks merely pieced out of his live sets, each set recorded straight away, hardware sinking under the clammy sweetness of Tuc’s hands, bumps and mistakes soaking into the rawness. There is an amazing sense of humanity that washes over you as each fibre of your being tickles – itches and gnaws to move, animalistic in nature to free itself from the containment of silence. In that sense, we see a perfect balance of desire and projection – internal desire, external projection. And each time, like in Habitations, he endues warm and subtle personality – vocal bites take you to characters in other lives, other times. Exoticism and relativity are as one. 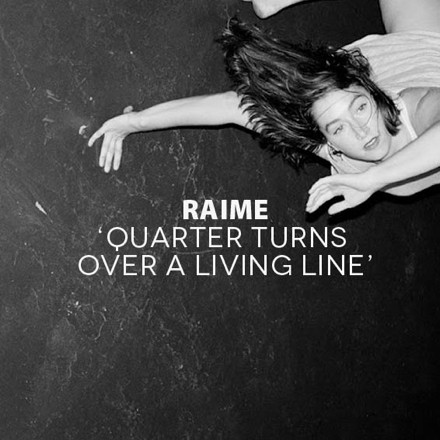 After experimenting extensively with their expression over the course of two years, Raime arrived at their monochrome momentum with these post-industrial, gothy compositions, which put the London-based producer duo into the avant-garde. Sounding like the strange, mutated offspring of urban Burial, doom metal and an eccentric, classical composer, Raime transcend genre and force us to experience music in new ways. Quarter Turns Over A Living Line positions the listener as a lonesome space traveler in an abandoned, mystical landscape, walking tortuous and gloomy paths. There is no light and no directions, only a slow rattling pulse to go by as bleak sound territory reveals itself and violently tingles the senses. For something so demanding and anxiety-inducing, it's strangely stylistic and elegant. The compositions are dark, noisy and drony, but without ever loosing structure, tightness and grip, oscillating between thick intensity and stretched abysmal space. If the apocalypse has a soundtrack, this would be it.

In the year when it seemed like everyone and their dog were talking about ‘Outsider Dance’ there was still a lack of discussion about General Elektro and its associated labels. Beginning where the legendary Elektro Music Department left off, General Elektro has mainly been an outlet for the project AU, but has also released a record from the Sex Tags Mania associated Busen. Both acts’ output could loosely be described as abstract techno, and carries many similarities to early Mika Vaino/Pansonic. Just like Pansonic, repetition is key and remains so on AU's third release AU3. The raw hypnotic tracks contain only a minimal amount of variation over their length, inducing a trance-like state in the listener. This is Berlin music that provides a stark contrast to the famous ‘Berghain sound’ of Ben Klock et al., and it is highly unlikely that any of the songs will be played in the club. The introspective ‘General Elektro Sound’ is focused much more on experimentation than on the dancefloor, and thus may go against outsiders’ expectations of ‘hedonistic’ Berlin. However, AU and General Elektro are very important parts of the Berlin electronic music landscape and unfortunately are given very little credit. If the standard of their output remains as high as it has been, this will hopefully be rectified.

Shackleton – Music for the Quiet Hour / The Drawbar Organ

Sam Shackleton’s Music For the Quiet Hour and The Drawbar Organ EPs appeared last year from nowhere, with minimal fanfare, minimal fuss. What arrived was a series of vinyl, packaged in a box ornamented with Zeke Clough’s idiosyncratic, post-apocalyptic drawings and released on Shackleton’s label Woe To The Septic Heart. What lay inside this visually stunning box, was a music more glorious than any other in 2012. But if the three EPs alone, which read like a sort of medieval triptych, were not enough, the listener is confronted with the centrepiece of Shackleton’s momentous release Music For The Quiet Hour. A continual hour-long piece divided into five parts that ebbs and flows as if it is a living and breathing organism. It is both delicate and robust, rhythms and polyrhythms are constructed before dissipating into nothingness, while the underlining primitive influence lingers unnervingly onwards. If the omen for 2012 was of the world’s impending doom, Shackleton’s ornamented box, with all the wonders inside, would have been the soundtrack to what happened next.

Listening to Arca weirdly makes me think of painter Francis Bacon; producer Alejandro Ghersi seemingly contorts and twists vocals and beats in the same way that Bacon contorts the flesh, producing songs that resemble hip-hop but in a strange, grotesque manner. It’s for this reason that, in a year full of producers toying with the conventions of dance and hip-hop, Arca’s Stretch 2 stood out. Released on what just might be label-of-the-year, UNO NYC, Stretch 2 is an absolute thrill to listen to, a slick otherworldly creation that’s as seductive as it is off-putting. Opener (and personal favourite) “Self Defense” best encapsulates Arca’s sound: the chopped-up vocals that weave in and out of the beat are near incomprehensible, firing out at a manic pace—and yet, despite their eerie quality, they maintain a dance-floor immediacy. Full of bizarro beats and masterful productions, Stretch 2 is a massive album that feels much longer than its actual humble running time of 27 minutes. 'Go for broke,' Arca spews out at the end of “Fortune”—and indeed, he does just that on Stretch 2, resulting in one of 2012’s strangest and most alluring albums.

Chairlift’s Caroline Polachek described Trust so well when she maintained on Pitchfork that ‘Robert Alfons has the most underrated voice. Live, he morphs into every sort of vampire – from low, rich snarls, up the octaves to eerily elfin and high – all while wearing a white wifebeater and chain…’. Much like it was for her, my love for Trust was cemented in person, except for me it was at MoMA PS1’s Warm Up. Trust’s music sounded perfect in that venue outdoors, surrounded by ‘the beautiful and the damned’ with all their ready flesh. It’s music for the bacchanal we all want to join, but never fully do. The music sounds so cleanly produced especially in the sterile land of PS 1, but everything else is filthy. Maybe I’m reading too much into this, but this is what Trust morphed into for me. And I remember him in a sartorial way like Polachek does: I saw him DJ at Glasslands wearing a shirt that appropriately held, ‘There’s No Crying in Baseball’.

Claiming my award of ‘Most Underrated Album of 2012’, Rain and Dust from North Carolina producer Constrobuz captured this year’s the-end-is-near-style darkness and decay as completely as anything else mixed down to tape before December 2012’s supposed end-of-days. Relying on the jazz standards of sample-based beat production’s past rather than diving head-first into this year’s overpopulated 90’s mall soundtrack pool, Rain and Dust borrowed so heavily from post-Dilla slice-and-dice methodology that it’s hard to imagine how a collage of jazz history so cutcopypasted can sound so smooth. Brass swells billow out over cymbal rolls played like piano notes while vinyl cracks and pops set a foundation like broken concrete covered in cigarette butts. This is years of aging under our feet, but from where I’m standing, I can’t help but feel like I’m staring straight into a future I’m not sure we even deserve.