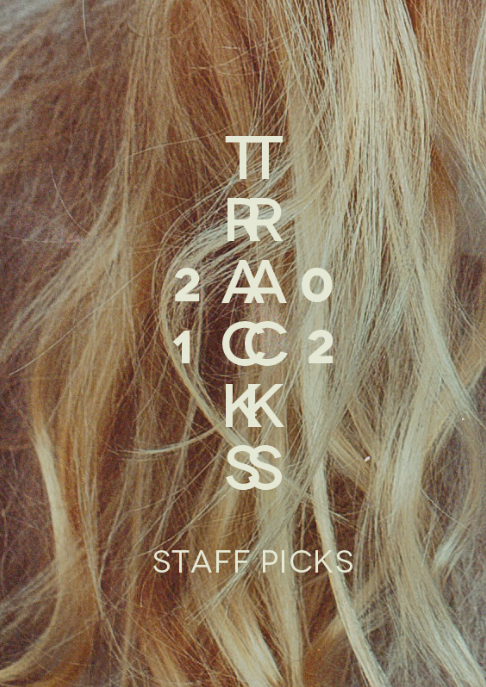 So here we go. Later than ever, but at least after the year that we're talking about is actually over, this is the first part of our brief series of posts to recap the popcultural mess that we've come to know as 2012. And while we're inclined to agree with our friends over at FACT that most of us and you will already be 'fed up of raking over the coals of 2012', and that 'the future is more important...than the past' (dude, it always is), allow us this brief moment of retrospective contemplation.

About the 'list' of tracks that you can see below, the process of compiling revealed that while it makes sense to ask all your authors about their favourite full-lengths and EPs of the past year, the same question won't get you anywhere as regards their favourite tracks. Our staff mostly ignored all hype and sense of cultural coherence, whatever that might mean, and suggested almost 300 different tracks that they had been into in 2012, a beautiful mess to look at, but nothing that could ever resemble a concise, consistent list whatsoever. Which is why we decided to simply pick the contributors' top one tracks, all of them different, and let them delineate their obsession, in all appropriate brevity. It is, for what it's worth, quite an unexpected and surprising, but lovely and tremendously intriguing selection of music.

However, what seems even more surprising is the fact that the whole twisted process after all did produce one undisputed and indeed overwhelming 'winner', the one tune that kept coming up in almost all individual lists, and which we therefore hereby solemnly declare No Fear Of Pop's track of 2012: Holly Herndon's dazzling, unabashedly academic masterpiece "Fade". In his review about Herndon's LP Movement, while rather skeptical about the piece as a whole, Warren O'Neill described the track as 'bending to the functionality by the dancefloor' without abandoning the artist's distinctly intellectual approach, with 'a strong sense of immediacy' and 'emotional weight'. A more than worthy number one indeed.

Check out the individual contributors' picks after the jump.

Thrupence "Folds": Crisp piano lies over sparse drums & solo flute which sound so perfect together it makes sense, "Folds" is one of the calmest tracks of 2012. (Kelsie Brown)

Grimes "Oblivion": Claire Boucher is the girl that brought the new shit in 2012. Her hypnotic breakthrough is as airy, minimal and sweet as it is dark, complex and raw. (Laura Li)

Andres "New For U": The club track of the year. Somehow joyous and melancholic at the same time and on top of that it really makes you wanna move. (Warren O'Neill)

Lindsay Tuc "Calm Down": It's that sudden climbing melody that runs up at the end of Calm Down that claws away inside of you. Each talon a different poison; warmth, sobriety, optimism, desire… It reaches right in and ensnares you in its grasp, sweet-heartache oozing into your veins. (Holly Friedlander Liddicoat)