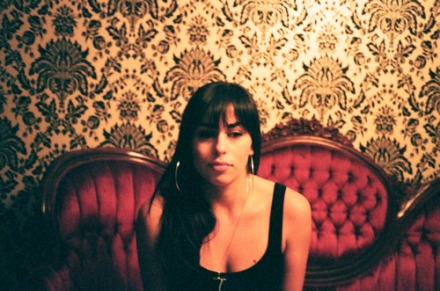 A few weeks ago I met up with Natasha Kmeto in Seattle to chat with her about her submission to No Fear of Pop. Her piece, revolutionary, eloquent, and diplomatic all at once, was a response to our critical coverage of 2013's Decibel Festival and their lackadaisical shortage of female artsits in their line-up. Kmeto was one of the featured female artists of last year's festival, and thus her reaching out to discuss the touchy topic about gender dispropotion or "under-representation" in electronic music struck a strong chord across many realms that have experienced and continue to experience chauvinism. What she and I landed on after an engaging conversation was that permeation, or being encouraged or educated to permeate rather than belong, in musical style, gender, politics, and whatever which way, seems a most sincerely innovative way to contribute to the ongoing pursuit of equal rights. Here's a recap of what we had to say.

Natasha Kmeto is a truly unique individual who, by genuinely implementing that individuality in her music, is benefitting the forward movement of electronic music's aesthetic as well as politic. Biographically, Kmeto is an ethnic permeation. When I inquired about her heritage, she smirked and said she's "Hungarian, German, Greek, and Phillipino," originally from Sacramento, raised in a feminist setting, with a grandmother from Berlin. Coming from a multicultural background, it's no big question that Natasha branched out to find space that supports experimentation for better artistry:

I went to school in LA and the way I was plugged into the scene in LA was very industry-heavy and the school I was at was into training back-up singers or back-up dancers for other artists and doing the pop machine scene where you can be disillusioned about the state of art ... It's like divorcing yourself from consciousness … where you're constantly bombarded by images of success. I wanted a change of pace and wanted a place where I could go and explore art as opposed to the standard music scene and I visited Portland. It's a very supportive art scene and proved to be more open for me.

In effort of finding a community that promotes deviation from models, these set "images of success," Natasha relocated up to Portland, Oregon, where she felt she could cheaply rent a studio space and comfortably "make weird shit" without any fear of ostracization or loss of good conscious. Her statement about divorcing oneself from consciousness speaks to the authenticity of her world of music. For her, it seems, music shouldn't only be good and brooding, like the climate of the Pacific Northwest and that which is found all over her album Crisis: music should also be aligned with experience, with consciousness and open perspective. This is best achieved after one is given space to find his or her own space. Alas, as a female artist, it's sometimes too easy to have plenty of explorative space and yet too difficult to be treated equally when it comes to booking. It is challenging, as we all know, to not be marginalized by the label "female."

You could be thrown into a roll ... it's either you're a woman or you're a human. I'm not trying to come from the perspective of manhating, because I'm not. I'm not trying to marginalize men ... I'm idealistic and I understand it's being idealistic to say that we shouldn't assign gender roles. Part of me would like to see that done away with but at the same time I want to represent other strong female producers. There are many who aren't tauted as highly as male producers, so I think the way out of that is to familiarize the public with the fact that women do other things besides get married and make babies, and I think that the vast majority of people still imagine it that way because they're not shown examples in their day-to-day lives. They're socialized that women are teachers, nurses, or moms, and they can be all those things and there's nothing wrong with it all. But looking at younger generations, I can see that they are already less rigid. So we'll see. I think electronic music is a great avenue for women because we can do it ourselves and it tends to be a more alternative scene. I feel like most men I meet in the scene are usually cool and not chauvinistic.

I agree, but I still think there's this intrinsic, unclaimed chauvinistic trend that dominates electronic music, making it a boy's party, and that was the feeling I came away with after Decibel. I had a good time, and felt that I was constantly surrounded by crowds so in love with the music; those crowds just happened to mostly be bros dancing to bros. And I felt that that's ok but someone needs to be aware of it, and if they don't want that type of festival, then maybe they should make a better effort of equivocal booking. But are there enough acts? Is having such discussion even helpful, or is it a detriment?

I think that there's a lot of women out there right now just crushing shit and it's different from what men do. I'm not saying that women's music is different or it should be different, but women do have a different approach because they kill it in a way that I relate to on a soul level. More women just need to go out to shows and experience that and look for that. And I think they do. I come from a completely different perspective too, coming from the queer community. In Portland, there's a disconnect between the queer community and underground electronic music ... they're not like "oh my god Mike Q!" and instead going out to dance to some top 40 stuff ... If they could go out and relate to it on a soul level then that would help too. That's what I'm trying to do. Maybe they come to a show because they really like singing or they really like R-n-B but then they hear some techno in the works or some drum-n-bass and then they'll be like 'I wanna explore that.' One of my favorite DJs in Portland, DJ Bianca, plays mainly top 40 to keep people happy but she'll also mix in Grimes, or mix in some Disclosure or start mixing in stuff like Jessie Ware, stuff that's a little left and center to the American top 40 but easier for trying to get people hip to that ... subtle moves like that is what is going to moves things forward.

One of my favorite things about Natasha's essay is how she validates permeation or equivocality overall. It's not just the crossing over of boundaries that we want, but rather the melting down of boundaries and letting all the contents pervade each other. Some individuals may choose to keep their boundary-defining label because they think it's empowering and relevant; still, rearranging things so that less power goes to out-of-date constructs also leaves room for those who wish to be identified in this way, or however they want, to be identified as such. It's really all about awareness, finding your own space to think about and arrange or fuse things, and making a choice.

Some of my favorite music is music that fuses things ... and I'm going to try and bring those elements into my music. Putting a fusion in front of people can be an uphill battle ... they won't know how to categorize this. I could've easily sang back up in Los Angeles or moved to Portland to make dubstep ... but there's still a lot of headscratching going on as to what kind of bills to put me on. You have to fight the big fight, though, in my opinion, to be singular, to be your own voice in order to voice to a lot of things, or to permeate and break down boundaries so that everyone can imagine a reality where a woman is on stage with electronics and executing it well, or someone is combining R-n-B and house. It's all about fusing, and breaking people's minds open. The human brain is programmed to categorize but for the people and artists I relate to the most, those categories are smaller. They're not big, broad categories of 'THIS IS WHAT IS;' it's about being able to step outside of yourself and seeing 'WHAT ISN'T?' ... it's about freedom of consciousness that I feel like a lot of people don't own. Some people can't imagine eating apples and cheese, they'll be like 'Ugh that's just backwards, I don't know what you're talking about,' and then there are some people who are like 'You know, I want to try that,' and those are the people who change things.

The people who don't try eating apples and cheese likely remember that foreign combination, and eventually the thought makes its way through the mind like a worm until they may decide when given the opportunity again to try it. And then they will have permeated with, or fused what someone else knows and what they know.

Let's all be permeable and permeable-minded. This is challenging with the paradoxes given by electronica, that is, its at times genre-specific, hard rhythm and metalic (and so less fluid-like) personality yet multicultural, equal-rights-for-those-who-wish-to-dance tradition. It's been brought to my attention that my favorite music tends to be the stuff that permeates even these, tracks that possess some kind of dreamy reverberation, atmospheric, slippery melody behind, beside, or maybe in front of delicious, crunchy, and solid beats. Let's apply these themes to our personal music tastes and learn more about how we can expand, give ourselves more room to fill and explore, and ask ourselves why we should in the first place. Let's be everything but exclusive, and take what we like but not exclusively.