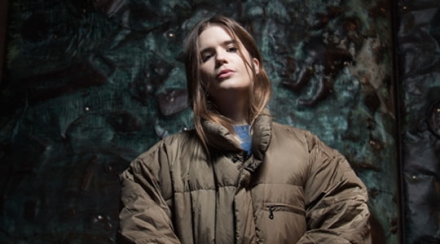 Krakow's Unsound Festival started on Sunday and so far it's been a Golden October dream, perhaps despite that true nightmare that was the early afternoon showing of Andrzej Żuławski's 1981 relationship drama-cum-horror movie "Possession" that I'm still trying to wrap my mind around. "The Dream" is also this year's festival theme – described by the curators as "a symptom of a world where self-expression and experience are increasingly mediated and commodified. It plays out on laptops used for work and leisure, in networked coffee shops, airports, international 'artistic enclaves' and nightclubs. Anxiety is its underside: those Living The Dream often do so in precarious financial situations, while in the background, ecological, political and economic systems lurch towards collapse; war looms on the horizon, threatening to escalate."

In more than one sense of the word, in the past few years Berlin has become The Dream for more and more musicians from all over the world, who mostly seem to come to the city in the search of exactly that: a place that is somewhat detached from the troubles of globalised late capitalism, where artistic expression is still possible due to a still comparably reasonable cost of living, and an overall attitude just liberal enough to not become an obstacle. Whether Berlin really is or has even ever been that dream place is one question, the other more pressing is in which way the expat community itself has started a process that's fundamentally changing the dynamic of the city's social geography. Soon, it'll be time to reflect on the sustainability of the dream. Artists have already started leaving Berlin again, moving to Leipzig or further east, with Krakow among a growing list of cities that now embody the illusion of a culturally rich location that willingly provides the means to devote yourself entirely to creative activity, without being forced to compromise. Which begs the creeping question – has it ever been about Berlin at all? "How do ideas of locality – or the lack of them – affect culture?," asks the panel "Place/Displace/Non-Place" at Naodowy Stary Teatr on Friday at 3.45, featuring some writers who should have to say something about that as expats in various European locations themselves.

However for the time being, legitimately focusing on the upsides of Berlin's evolvement into a truly global creative hub, the Musicboard-funded Berlin Current poject by CTM Festival has started to showcase some of the exciting aspects of the expat scene along the Spree. Over the past two years the Janus night has certainly become the epitome of New Berlin. Still, considering the aforementioned, it isn't entirely clear whether the scene around Janus is even a Berlin thing – or merely something that was started here by accident. After its first Berghain night last Friday the Janus crew is coming to Unsound Festival this week. In anticipation of the event and in order to explore some of the topics just mentioned, we spoke to resident DJ Kajsa Blom aka KABLAM via email. Read the interview after the break.

CTM's Berlin Current showcase featuring the Janus crew is part of Unsound Festival's night "The Ticket That Exploded Part 1", happening at Hotel Forum on Friday, October 17. More information on the event is available over here.

Try to describe Janus in one sentence.

In which way does the night's concept embody an approach to club music that was missing in Berlin?

I would say its concept is genre-crossing, rude, more fearless and more diverse than what usually is being served in Berlin’s nightlife.

What does Berlin have to do with it in the first place? You've had a night in NYC already and now you're gonna be at Unsound. In which way is Janus' sound essential to Berlin; could it exist without the city or is its location wholly incidental anyway?

Having a space like Chesters really played a big role. A space like that would probably be impossible to find in NYC or Stockholm. It was not too big, not too small and had a great sound system for that size. It worked as this residency where we could try out things. For me having never really DJ’d before, this was the perfect place to try out things and learn.

What do you like about the Berlin crowd? Do you find it particularly open-minded or rather the opposite, still fixated on techno and house?

The ”Berlin crowd” is quite diverse I would say, but there is definitely still a huge crowd fixated on techno and house. Don’t get me wrong, I love dancing to hard techno, and I really respect a good techno DJ, but it’s almost like a different occupation. Using the CDJs you can manipulate the tracks in ways you can’t do on a record player. I think a large part of the Berlin crowd still wants to see DJs who play records, but I believe that’s slowly changing too.

How long have you been in Berlin now? Do you think that the place is getting more or less interesting? What are some developments that concern you?

I’ve been in Berlin for two years, but I am currently in Stockholm to write my BA thesis. I definitely think it’s getting more interesting, but that is my individual experience. I think it is intact with me discovering more parts, areas and scenes, opening up my eyes and ears more and more.

Janus is usually depicted as this Brooklyn thing that came to Berlin – by the New York Times anyway. You are from Sweden, right? How did you get in touch with the rest, and how do you fit in from your own perspective?

I am from Sweden, but I am half-German. It is kind of not a Brooklyn thing-- no one in the Janus crew is from Brooklyn. I was not a part of Janus from the beginning but I was at almost every Janus party before I became a resident, and that’s how I got to know Dan, Michael, J’Kerian (Lotic) and James (M.E.S.H.). I had never felt at home in a club environment before. I loved how they approached the whole idea of what a club can be and I loved how they played so fearlessly. Last August Dan asked if I wanted to play a Janus night; I said yes although I had never really mastered the CDJ-2000 before. So I watched some Youtube tutorials, went there and played a bunch of Jersey club tracks and they liked it. I can’t point out exactly what it is that we share that make us work together, we just belong together, it just makes sense.

What are you trying to achieve with your own work? What's your main incentive to do the stuff you're doing?

Whoa, what am I trying to achieve…? I guess I want to produce something that sounds exactly like me in that moment. But it’s also about being fearless, not being afraid to fail. It’s gonna sound corny maybe, but I think my main incentive lies in the creation of ’the new’. When new thoughts and ideas are born, just in that moment, there is a sense of complete freedom. Of course new ideas aren’t born out of nothing like some kind of magic, most of the time they are born as an opposition toward existing norms. I hate genre categorization for instance, this is something that is flooded by norms. I hate the genre term ’IDM’ (Intelligent Dance Music)-- why is that type of music more intelligent than other dance music? EDM is not less intelligent than IDM. Let’s talk about what it actually sounds like and how it makes us feel. Let’s stop forcing music, and people, into categories that they have not asked to be a part of.

Adding this spatial dimension, like a more or less public space where these ideas can take form and be introduced and exchanged, that makes it real. I used to think my music experiments were made just for me, but I was wrong!

What's next for you artistically? What do you expect from the Berlin Current funding? Is there anything in the works already that you could tell us about, or is it mainly your participation in the showcases?

It is mainly my participation in the showcases. The night we did at Berghain was the most insane and beautiful, and now we are doing another night at the Unsound festival on Friday with Dj Hvad and Amnesia Scanner. I am super excited! I don’t know what’s next. With my own stuff I am still trying to figure out what direction to go in and it is an interesting phase because it takes me to all kinds of places.