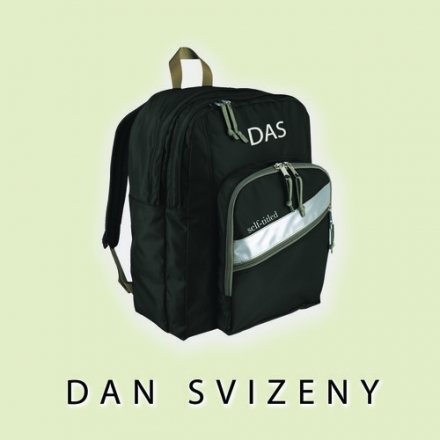 While cycles of mass consumption continue to sensationalize systemic worship in the form of militarized mechanical competitions or yet another corporation sponsoring subversion, our Philadelphia-based comrade-in-hearts Dan Svizeny has taken towards composing his own colossus of beauty. Clocking in at just under thirty minutes, Daniel Anton Svizeny is the first play towards self-actualization that we’ve heard from the silhouette we’ve come to know so fondly as Cough Cool. So why the subtle dichotomy? Perhaps our friend is starting to feel less like a misfit and more of a veteran within our ever-evolving world of bedroom recording. Or could this be the Trojan horse to Dan’s dark passenger? Most likely, neither.

As his umpteenth album, first release since last year’s 29, and second release on Mirror Universe, DAS is characteristic of what we’ve come to know of Dan’s recordings. That is, peach fuzz, guitar melodies gently pushed into the red, vocals floating on high, and just past the ballet of drum machines and charming introspection we can still frolick with the ghosts of his former Blackhawks and Nude Beach collaborative projects. So it’s here where I wonder how to understand this album’s context within the wealth of Dan’s archive.

What makes Cough Cool, Nude Beach, Blackhawks, and now (well, technically beginning with those No Kings releases) Daniel Svizeny proper such a treat in the aural landscapes of our lives is that the realm he constructs exists beyond recognition and validation. You’ll hear it from the source first… it’s awesome that through the internet we can appreciate the qualities stirred into a Svizeny release, but these albums are simply meant for the moments of time in which they’re embedded. The point of this journey isn’t to trace a line graph of maturation, but for the opportunity to share these cycles of catharsis for the various demons we see excorsized and reinvigorated through the course of our lives. It’s in this that Dan Svizeny detaches himself from the traditional role of the musician and plays the part of a sympathetic friend, offering a crutch to the world so that when we long to find that piece of ourselves we know we’ve already lost we can say “fuck this” and not have to move on alone. Or, going by the titles and lyrical content of this collection, maybe it’s Daniel Anton Svizeny that finally needs us by his side.

Daniel Anton Svizeny is out today via the recently revived Mirror Universe Tapes. My favorite track is “Trenton, NJ” because in 2010 Dan and I first met in Trenton/Ewing to play a house show at the now defunct (and legendary) Basement Gallery. Order your own copy of the tape here before I claim them all.