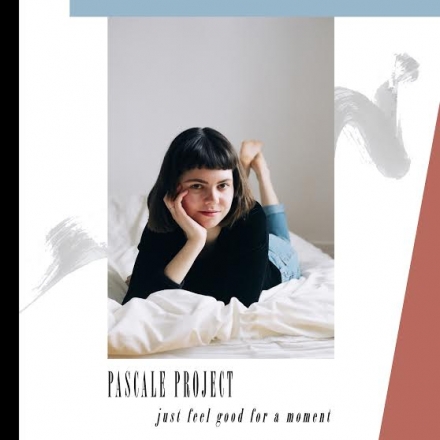 As Mathematique, Montréal artist Pascale Mercier gave us positively manic synth pop, some kind of 80s-informed proto-charts pop seen through the lens of an extraterrestrial sociologist or, in the words of my esteemed colleague Parker Bruce, music that "sounds like it was recorded underwater in Atlantis". Whatever the association, however, Mercier's work under that moniker was, while usually featuring vocals, heavily focused on the instrumental aspect. Indeed, her voice mostly served rhythmic functions almost more than being included for the purpose of delivering a specific message, as most distinctly shown by Mathematique's stellar singnature tune, "Summer, But I Don't Know". On her forthcoming LP Just Feel Good for a Moment, this has changed. The record is further exploring tropes of classic popular music, which entails a more prominent emphasis on singing along to Mercier's lush synth melodies. Marking the shift with a new name – Pascale Project – the artist's compositions benefit greatly from her newly (re)discovered alto.

Just Feel Good for a Moment will be out this summer. Listen to the premiere of the first single "Super Natural" below and read a brief interview with the artist after the break.

What has happened in your life since your tour and the release of Feel?

After the tour I did last summer I played a lot of shows in Montréal, then I decided to take a brake in the fall cause I needed to concentrate on finishing the new album.

Why the name change? Did you just want a new name that you're more comfortable with or is it also a change in your approach to making music?

I had been thinking about changing the name for quite a long time...  But I didn't do it earlier cause I thought it would be confusing for the people and too complicated. But at some point when I was composing the new album, I was having trouble finishing songs and I wasn't sure of what direction I was taking...  It just felt like I didn't have any attachment to 'Mathematique' anymore, I associate this name to the early stuff I used to do, which was instrumental. I just felt like I needed to change my name to be able to finish the album and move forward in my project, it's like a new start, it feels really good and it's inspiring.

Would you agree that while Just Feel Good for a Moment is certainly not a 'sad' album, there are more pensive, maybe melancholic undertones?

I agree this is not a 'sad' album, I would just say that all the songs are about normal feelings, good or bad, and they're just really sincere. I'm just writing about what I feel, I sing mostly about love and life and not thinking too much, I guess the song "Just Feel Good for a Moment" is all about those themes.

The album feels even more inspired by the glory days of 80s pop than its predecessor. Did you use mainly analogue hardware to record it or was it made on the computer?

I only use digital stuff to make my music, it's all composed with Ableton Live and I also use some external digital synths. I used to make music with analog stuff before but now I'm really not into that kind of sound...  I never wanted to make music that sounds like something in particular, everything I listen to inspires me.

Is Montréal still a good place to be a musician, or is the city changing a lot?

I really enjoy being here, it's crazy how everyone is making music...  I'd say it's not so easy to get your music known because of that, everyone works really hard and it's sad to think that a lot of very talented people will never get the exposure they deserve, because there is just too many bands here. It's mostly a question of luck I guess.

Do you feel like you're part of a healthy creative community there?

Yes, totally, all my friends make very good music and they inspire me a lot, everyone helps each other here. It's nice that all the scenes are kind of blending together and that there's no restrictions, like you can go to a show where the lineup is very diversified but at the same time it all makes sense.

Who is gonna put out the album?

I am working on starting a label called Géocités, with my friend Philip Karneef, who also mixed and recorded my new album as well as the EP I released last year. I also might release it with an other label in Europe but it's not decided yet.

Are you planning on touring with the album? Is it gonna be solo performances?

Yes, I am coming to Europe again this summer from May 21st to June 24th, touring with Bataille Solaire, another solo project from Montréal. Still performing solo, I enjoy it so much and it's very easy when you travel, hehe.

Will you come to Berlin again?

I will be playing the Torstraßen Festival on June 13th and also at Loophole on June 18th!  Here's the FB event of the tour if you wanna know when and where we're playing.